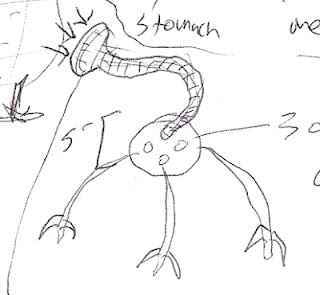 Minor: Full Retracted Mode:  The tube sucker pulls all extremities inside the central body and turtles up.

Recharge 4,5,6: Claw Pounce: Jump 6 and make 3 x Claw attacks vs target, this move does not provoke attacks of opportunity, if all 3 Claw attacks land make a Stomach Tube attack at +26 vs. AC.

The ubiquitous tube sucker is the aquarium cleaner of the alien planet's surface.  Three metal plated tentacles ending in wicked claws emerge from the 5' spherical body, itself a metal plated ball of muscle.  A charged gas cloud inside the body serves as a simple brain, and three organs floating in the gas detect electro-magnetic radiation and minute vibrations.  A 10' long flexible tube containing an acid-filled stomach exerts a telekinetic pull on living organisms.

The tube sucker reproduces asexually, a new organism forming like a corm on the outside of the parent's body.  Even the youngest, newly separated tube sucker has the claw and stomach attacks described above, and they typically grow to full size in very short order feeding on the detritus left by the winter storms.  Their ability to quickly assume a fully retracted spherical form allows them to survive even the harshest of winter storms.  Their gas cloud brain is not affected by the constant jarring as the metal plated sphere of muscle surrounding it bounces across the landscape.

Tube suckers usually drift around alone, but occasionally groups are encountered.  Often the group has its origin at a large food source nearby, such as a downed red layer giant gas body.  Hundreds of tube suckers might be found at a fresh collision site, sucking up the thick layer of organic debris.

Tube suckers seem to be constantly hungry no matter how much material they dissolve in their tube stomachs.  The particular kind of acid found in the tube stomach has a connection to shadow in its molecular structure.  It has a constant supply of hungry ions that stream into existence from beyond.  A shadow organ at the base of the tube sends the byproducts of the digestive process through shadow to re-incorporate as energy elsewhere in trans-dimensional space time.  It is possible that every living tube sucker is part of a single larger entity elsewhere, the functional mouths of a multi-dimensional being.
Posted by Unknown at 12:47 AM