The Islets of Langerhans

A location for fantasy role playing found in the pancreas :)

I ended up wondering about insulin production and was reading about the endocrine system tonight on good old Wikipedia.  As it turns out, insulin and several other hormones are produced in the pancreas in special nodes called islets of Langerhans.  I found myself looking at this visually appealing image of the difference between a rat islet of Langerhans and a human islet of Langerhans when it struck me that it would make for a beautiful city map.

I present the duchy of Langerhans, the walled city, the sinking city, the city of canals: 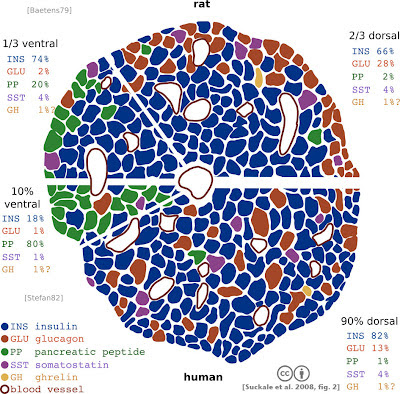 Originally a city built on rocky outcroppings emerging from a coastal swamp, the land slowly sank and the sea encroached until many of the lower lying sections of the city were underwater.  A wall was built around the city in an unsuccessful attempt to keep the sea out.  Roads became canals and the inhabitants simply filled in old stone houses as they became submerged and built new ones on top.  This resulted in the famously confusing "floating neighborhoods" of Langerhans, houses built on top of rock pillars and often connected with rope bridges at the 2nd or 3rd story.

I see the white areas as canals, with the main gates opening into major East-West canals interrupted by large walled structures (cathedral and castle?) and two diagonal North-West and South-West canals leading to the other gates.  Other than that, the duchy is a chaotic sprawl of densely packed houses on rock pillars (blue) with some solid ground in the form of rocky islets  taken up by markets (brown), public squares/civic structures (purple) and spectacular hanging gardens (green).  All of the white areas circled by brown are large walled structures built on craggy rock outcroppings, some private castles, others religious or military structures.

I am seeing all kinds of adventure potential in the now flooded and mostly filled in houses that support the current dwellings, like a submerged Tekumel underworld.  Obviously there has to be an Esoteric Order of Dagon here as well, with fish-men and dark temples not far below the placid surface of the canals - there is a Shadow over Langerhans...
Posted by Unknown at 11:17 PM