Snake Man Primes are the warrior and dominant caste of snake men.  They only have male snake sexual organs.  There are 7919 lines of Primes, a number that has not changed since the original mutation in a batch of temple servitor eggs on Celestia birthed the species.

Each line has a Prime, the eldest living member of the genetic line.  When the previous Prime is killed (a Prime is effectively immortal and will not die of natural causes) the next oldest member of the line becomes the new Prime.  Only the Prime of each line can reproduce; upon achieving Primehood the four organ tentacles constantly emit spores that grow into a fleshy mycelial mat in the presence of energy and moisture.  These mycelial mats produce fruiting bodies with a water filled pod on top.  Connections through shadow to Shadow DNA (sDNA) cause mycelial tissue in a specialized node to turn into animal flesh and a tadpole is formed which swims up the stalk of the fruiting body and lives in the pod, eating algae blooms in the water if there is light present or pieces of the fruiting body itself which decay and fall off in the absence of light.  A fully grown tadpole bursts from its pod and wriggles to a dark place to metamorphosize into the adult snake man form.  Each snake man is an exact genetic clone of the Prime of its line with whom he shares a telepathic link of unlimited range. 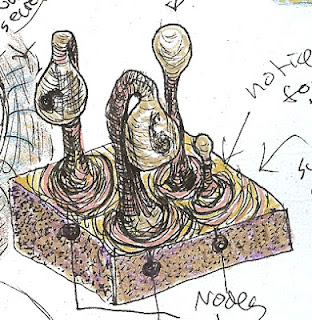 When a snake man becomes Prime a set of genes are activated which cause a dwarf female conjoined twin to grow along the arm and left shoulder.  One eye opens in the palm of the left hand from which the female twin can see.  It takes many years for the newly developing female twin to achieve adulthood, and many more years to fully access the memory of the previous female twins.  A fully mature female twin has full access to the memories of all her clone-sisters before her.  Even newly forming female twins have powerful psychic abilities which add to the battle prowess of the Prime.  When a Prime raises its left hand in battle and the eye of the twin opens, enemies cower and flee.  Over long centuries the female twin's continued growth causes a hunchbacked deformity that saps the physical strength of the Prime even as the psychic powers of the twin continue to expand exponentially.  The lines of the Primes are ranked according to the longevity of the Prime of the line.  The oldest Primes are completely dominated by their female twins in normal life, existing in a kind of vegetable slumber while the twins hone their mental skills.  The 10 oldest primes have not stirred for over 20,000 years.  If roused the combination of deformed male Prime warrior and ancient female psionist would be perhaps one of the deadliest combatants in the multiverse.
Posted by Unknown at 10:04 PM