Last night was the third session of the 4e game I just started running.  A good portion of the session was spent getting acquainted with, cursed by and learning from the four shrunken heads the party removed from an ancient frog temple. 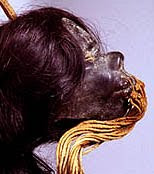 The first head to make its presence felt was Ghanan, who turned out to be a greedy little thing.  Vomar was examining the heads because he had felt a magical aura emanating from them.  The mouths and eyes of the heads were stitched shut and a braided coil hung from their sewn lips.  As Vomar tried to understand the heads one of them opened its eyes and looked at the frightened bugbear cleric.  Despite the twine sewing its lips shut, the shrunken head started a furious rant that no one in the party could understand.  While this was going on the head levitated up into the air so that it was face to face with Vomar.

Vomar introduced himself and asked who the shrunken head was.  A shimmering green field of force, vaguely recognizable as a humanoid body, came into being underneath the shrunken head.  "Ghanan" it replied

Ghanan then proceeded to demonstrate a remarkable ability to communicate through the gestures of his green energy body.  Ghanan was able to convey that he demanded a sacrifice of fresh fruit be burned in his honor.  Luckily, the party was able to find some banana-like fruit to appease the head.  In return, Ghanan flashed a green beam of light from his eyes which imprinted the knowledge of how to perform two rituals into Vomar's head.  One of these rituals was comprehend languages, which Vomar performed so that he could understand the heads.

Vomar then began asking the other heads questions; two of the heads remained motionless and apparently inanimate, but one floated up and revealed its name to be Hunapa.   Hunapa started freely answering Vomar's questions, revealing that the four had been powerful sorcerers opposed to the people who worshiped the Elder Frog.  Hunapa was just beginning to relate how the four heads had been created by their enemies to form a combined focus that could communicate with the Elder Tadpole when Ghanan interjected, telling Hunapa ,

"Be quiet!  Don't tell these idiots anything!  We can get them provide sacrifices to us in return for our knowledge."

Vomar didn't like the sound of that, so he made a vaguely threatening comment that might have had something to do with tying the heads to a rock and tossing them into the river.

"Do you know who we are, Mortal?  Do not threaten us."

Vomar really didn't like the sound of that, so he summoned his floating disc to him.  The ceramic basket that the four heads had been discovered in sat on his disc, traveling a ways behind the two rafts because it currently held a strange gem that radiated a 60' long 20' x 20' rectangle of completely impenetrable darkness. The party had found the gem in a submerged temple they had explored, but it seemed to be completely unmovable when they discovered it.  Putting the ceramic basket around it instantly broke that spell, however, because the gem clattered down into the basket.  It still emitted the column of darkness straight through the basket, but the party could move it.  When they took the gem out of the basket it instantly froze in mid-air and became unmovable again.  The party reasoned that the basket must have some kind of magic dampening effects.

As Vomar turned to grab the basket, Hunapa spat out a curse that took the form of a green spirit jaguar as it left his mouth and leaped through Vomar, leaving him stunned and incapable of actions.  The rest of the party had been watching in astonishment, completely unable to understand the heads.  When it became apparent that some sort of disagreement had led to Hunapa incapacitating Vomar, Tilia the minotaur warden and Hammer the warforged berserker ran across the boat toward the scene.  Unnoticed by the party, one of the silent heads cracked a slight grin and two invisible magical nooses caught Tilia and Hammer and yanked them up into the air, upside down, hanging by one leg.

All four heads were now angrily buzzing around over Vomar's motionless body.  Tilia desperately began talking to the heads, hoping that they could understand her.

"We won't put you in the basket!  Lets work out a mutually beneficial arrangement here.  We just rescued you from centuries of captivity in the basket!"

The heads began to calm down and Tilia and Hammer managed to free themselves from the invisible nooses.  Subsequent conversations with the heads revealed more about each head's unique personality.

Ghanan turned out to be purely motivated by greed.  He demanded, among other things, burnt offerings of honey and fatty meat.  He not only refused to answer questions without receiving some form of payment first, he loudly and rudely prevented Hunapu from answering questions that the party posed as well.

Hunapu, from what the party was able to glean over time, seemed to be a genuinely nice guy.  All the other heads seemed to be unanimous in their dislike for the unfortunate Hunapu, constantly deriding him for being soft and friendly.  The party did finally discover that Hunapu loves music, dance and art, and doing a performance in his honor would make him very happy.  Tilia sang a traditional minotaur tune and Vomar sang sections of the catechism of Kord.  Hunapu loved this and taught Vomar how to purify water and brew potions.

The third head to talk was Tlacolotl.  He demanded blood sacrifices.  He never spoke directly, but sent animal messengers to whisper in Vomar's ear. The first messenger was a flying squirrel that glided out over the river and landed on his shoulder.  Vomar caught it and sacrificed it to Tlacolotl, holding up its tiny heart.  Tlacolotl was pleased and taught Vomar how to summon an Unseen Servant and call an Animal Messenger.

The last head to talk was Xbalanque (Shi BA Lan KAY).  The other heads referred to him as the keeper of knowledge and seemed to hold him in high esteem.  He demanded that the party reveal secret knowledge to him before he would help in any way.

By the end of the session, the party had defeated a four-armed white demon ape that was turning dead miners into animated statues.  When it finally fell, Vomar ripped its heart out and discovered that its heart was a great, beating emerald of unusual clarity.  Torn between his desire for the emerald heart and his desire to help his fallen comrade Hammer, Vomar finally plunged a dagger through the emerald heart and offered it as a sacrifice to Tlacolotl.  Tlacolotl was ecstatic, and he pressured Xbalanque to restore the fallen warforged.  Xbalanque agreed, after getting Tlacolotl to say that he owed Xbalanque a favor now.  Xbalanque returned Hammer to life.

As the party gets to know the personalities and desires of the heads better, there is much they can learn from them.  The heads have their own agenda, of course, and the players have not come close to figuring it out.  While the heads are a powerful force, I rarely had them intervene in the game.  For one thing, they can only animate themselves and move around through force of will for 20 rounds a day.  They are always aware of what is going on around them, but they can only exert their force on the outside world if those 20 rounds have not been used up.

I didn't go all softie DM on Hammer, either.  I had written down Raise Dead as one of the secret rituals that Xbalanque had knowledge of.  When the party chose to sacrifice what would have turned out to be an incredibly valuable magical gemstone to Tlacolotl, this pleased him so much that he was willing to go out on a limb and really push Xbalanque to raise Hammer.  Having Tlacolotl owe Xbalanque a favor may still turn out to be a big deal down the road as well...
Posted by Unknown at 11:16 PM