Let me say first that my least favorite thing about D&D 4e is its treatment of magic items.  That should probably be the subject of its own post - suffice it to say that I miss the unique flavor of magical items in previous editions.  I have been creating a number of low powered unique items for the 4e campaign I am running in the New World setting.  This has worked out great so far, as the items help to make the setting come to life and have also enabled some pretty cool gameplay.  Without further ado, a selection of magical items for 4e (Menga Leaves and Sinda Berries converted from the 2e supplement "The Jungles of Chult"): 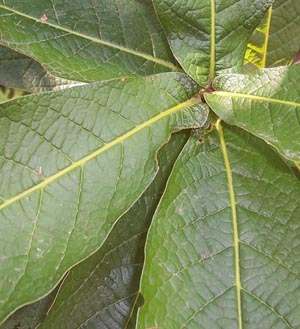 Menga Leaves - These broad evergreen leaves can be identified by their yellow veins, palmate structure and sap that smells of licorice.  The dried leaf can be powdered to form a snuff, 1 ounce of which may be taken as a minor action to restore 3d8 HP (costs 1 healing surge).  Taking more than 1 ounce between extended rests  will likely result in unconsciousness - the drug makes an attack at +15 vs. Fortitude for each full ounce taken in excess of one ounce.  If this attack hits, it results in a deep, comatose slumber that lasts for 4d6 hours. 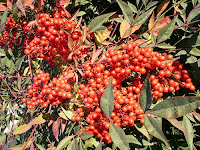 Sinda Berries - Dark brown berries that cluster on a low-growing creeping vine that is only found along the edges of jungle clearings.  1 dozen berries may be eaten as a minor action to restore 1 healing surge. 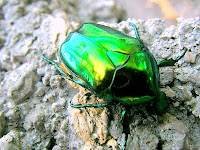 Green Jewel Beetle - The beautiful preserved shell of this beetle may be crushed to form a powder that can be ingested as a minor action.  This grants a fly speed of 6 until the end of the encounter (or for 3d6 minutes if ingested outside of combat).

Vanilla Bean Pod:  These long, dark bean pods have a heavenly smell and subtle flavor.  As a minor action, one pod may be broken open and sniffed.  This restores the use of one expended encounter power.

Anointing Oil:  When this oil is rubbed over a naked body, it grants a +6 bonus to AC and resist fire 5, resist cold 5.  These benefits last for two encounters, and the character has to remain completely naked the entire time.
Posted by Unknown at 3:55 AM