Dream Physics and the Bizarre in Gaming

I have run PCs through dream sequences in almost every campaign I have ever DMed.  In my early days as DM (we ran 2e and loved it) I used dreams as plot hooks and a way to introduce demonic and magical influences in ways that made the players think beyond the dungeon.  I started exploring gaming in active dream state with an adventure I wrote involving four pocket dimensions contained within the rubies on a ring the players found in a treasure trove.  Powerful entities in these dimensions reached out to the PCs in their dreams and planted the seeds which would ultimately result in discovery and exploration of the pocket dimensions in the ring.  This was an example of my "gaming" in college, when I was not actually playing but still compulsively wrote D&D material.

My games tend toward the extremely bizarre by almost any standards, so perhaps the dream state is the platonic ideal that my games strive toward.  Long before the recent dream adventures of Tilia, I introduced many other situations in my 4e game that are analogous to the lucid dreamstate; I have always liked the results when I give the reins to the players and let them come up with the limits of their actions.

The first time this happened in my 4e campaign was toward the end of the players' exploration of the Temple of Tamoachan.  Naturally I had placed the temple above a long-since-covered-in-solid-rock-by-tectonic-processes alien spacecraft, which radiated the energy used to power many of the crazy magical networks the party had discovered throughout the temple (I have to crazy up even a crazy tournament killer death trap 1e module, of course).  A near climactic battle in a sub-level I created featuring a massive worship hall with "benches" that animated into minions and huge statues that animated into huge demons that kicked major ass was close enough to the energy-emitting alien vessel that I allowed the PCs to take a full rest and refresh all their powers as a minor action by focusing on allowing the alien energy into themselves. Once the PCs got into the swing of things it was a spectacularly fun combat, with me hurling far greater numbers and more dangerous opponents against the PCs than they could have ever expected to survive, and them blowing daily power after daily power and refreshing all damage each round in a whirlwind of death and destruction.

This was just a primer for when the party managed to teleport inside the spacecraft.  Finding themselves floating in a sphere of white energy that responded and conformed to their expectations, the players soon figured out they could "operate" the spaceship using whatever method they were best at. Hammer the barbarian fired lasers from the energy sphere at far away targets by visualizing his target getting blown the fuck up and using special 4e style attack powers with his ax to cleave the space where he was visualizing the target; meanwhile Beautiful Bob talked the white energy into doing what he wanted and soon gained access to the "ships logs", the total input the energy field had ever received from its former alien users as well as the myriad of sensors scattered throughout the solar system the ship was connected to.  Beautiful Bob soon absorbed the entire history of the world from birds eye view, seeing the continents split and join and the oceans rise and fall and the eventual beginnings of plant and animal life.  This is when the party learned that all intelligent humanoids were the failed byproducts of alien snake man experiments to produce a superior race of bipedal snake warrior servitors, cast off from the golden city on the meteorite into the swamps and forgotten about by the snake men. 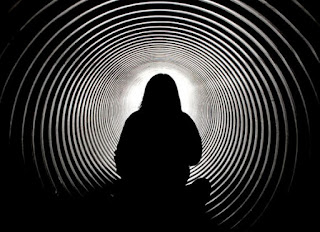 Unlike bending reality in the alien spacecraft, I usually make limits to dream physics beyond simply what the player thinks to accomplish.  When I ran Tilia through her dream recently, I made a few notes about the physics of each stage of the dream journey and also improvised details on the fly.  Once Tilia became lucid, I allowed her more control over the dream but I did not give her 100% freedom.  Early on, she mostly walked because that was what her player expected her to do.  I had made a note that she could fly by walking or running on air in most of the dreamscapes, but Mike never thought to try that.  Floating in the mist and the great fall were examples of dreamscapes that started out with the presupposition of not standing on solid ground as part of the beginning dream description, but in all of the other scenes that unfolded in two long dream sessions, Mike assumed that Tilia was standing on the "ground" the whole time.

I assign a sort of elasticity to dream physics; they mostly resemble normal physics at first glance, but prolonged prodding and investigation will soon push them far past the normal state.  More accurately, the act of prodding and investigating shapes the direction in which the dream is pushed past normal expectations; the elasticity is a way to describe the resistance when approaching the limits of human comprehension (which a dream cannot stray beyond), and the resulting snap back into a more normal state of affairs.

There are limits to the bizarre in Dream Physics which do not exist in my alien and trans-dimensional gaming explorations (both are also strong recurring themes in my gaming).  A dream is after all a product of the mind, which experiences and processes reality while awake, and then deals with it while asleep.  Even though the sleeping conscious is not constrained by physical laws, physical reality forms much of the basis of dreams and provides a general framework past which a dream cannot be stretched too far.