The players in my 4e game surprised me last session by deciding to track a fleeing vampire into the jungle rather than deal with any number of what I had figured would be seen as more pressing matters.  They had ended the previous session at one of those crossroads moments when they had just wrapped up one little mission and had a wide open decision about what to do next.  I try not to over prepare as a DM in these situations because you never know what the party is going to do, but I figured they were most likely to either cash in on the offer to be introduced to Ruskus and his band of River Dragons that was made by the defeated slaver a few sessions ago (and learn more about another aspect of the fractured river deity), visit their connections in the city of Siss-Anor (to learn more about the activities of the snake men) or investigate the ruined dungeons left behind when Manu Jibleetu blasted off into space in his twisted tower.

So of course they decide to chase after a vampire that they didn't even know about until two sessions ago and who has really never done anything to the party, or even done anything to make himself a logical target.  He just existed, and he was a vampire, and he ran away, and apparently that was enough to make the party chase him.  His name is Guachimines and his title is Left Hand of the Keeper, but the party has been calling him "Guacamole" and I even found myself calling him Guacamole a few times last session when I wasn't being careful.  Guachimines was created by Trumak, the Keeper of the Chamber, who was defeated by the party two sessions ago and his consciousness trapped in a blood gem.

The party knew Guachimines was originally from the head-hunting tribes that lived in the foothills of one of the Zamonas' major tributary rivers, and figured he might be heading back to his old homeland.  At first they were just going to fly the hovercraft over to the hills and find his home village and poke around there before he showed up, but eventually they figured out that they could track him directly through his connection to his master Trumak, even though Trumak was mostly destroyed and what remained was bound inside the gem.

The party eventually caught up to Guachimines and his group (Guachimines had several vampire thralls and 18 abducted river worshipers with him that he had transformed into a flock of bats and flown off with) about 50 miles from the confluence and discovered that they had arrived about a half hour too late to keep Guachimines from jumping into the future.  An uneasy standoff with the vampire thralls ended surprisingly with a decision to parlay with Ibi Shadowhands, the leader of the thralls.  Most of the vampire thralls had one arm that ended in a large metal flamethrower, but both of Ibi's arms ended in shadow appendages intended to make him a more formidable ritual caster.  When Guachimines jumped into the future the vampire thralls suddenly found themselves free willed and masterless for the first time.  Ibi turned out to be a somewhat sympathetic character and the party, after much debating, decided to spare the lives of the thralls and task them with rebuilding the Badi-Badi temple that the party had just destroyed, minus the complex shadow circuitry.  This pleased the thralls, who had been members of the temple in life and then had spent thousands of years of undeath assisting in the rites of the chamber.  I think this also helped appease Tilia a little bit about the decision to spare their lives, because Tilia had been upset that the rest of the party destroyed the temple while she was lucid dreaming on the shadow table trying to figure out more about the temple's past and purposes.

After investigating the bloody ritual sacrifice of the 18 worshipers and the intricate pattern of entrails left behind by the time jumping vampire, Beautiful Bob called on the restless spirits of the recently slaughtered to help the party follow the vampire into the future.  He succeeded wildly and the session ended a little early with me saying that I wanted to make sure I was fully prepared for the awesome encounter that was sure to follow.

This is going to be fun.

There was some amusing back and forth before the jump as the party instructed Curious George (their sentient magical hovercraft) to "meet them in the future" but not tell them about anything their past selves said after they came back from the future.  That way, they told me, Curious George wouldn't influence the events in the future present and they could come back to the proper past. 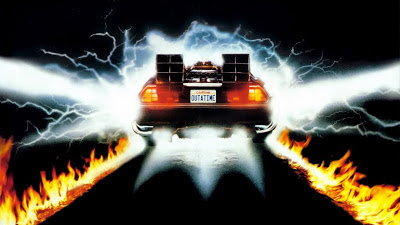