I have always been fascinated by pterosaurs.  I loved all manner of dino-critters when I was a wee lad, memorizing the names of several bookfulls before I was in kindergarten.  It's probably no surprise that I like to stick dinosaurs into the RPGs that I preside over even if genre and convention would dictate otherwise.  As soon as the PCs in my 4e game crossed the great mountain range and descended into the seemingly endless jungle beyond, they ran into a group of allosaurus.  When they first encountered the volcanic island  at the confluence of the of the major tributary rivers of the Zamonas, they saw winged dinosaurs soaring on the thermals overhead (yes, I know that pterosaurs are not actually dinosaurs, but come on).

I get to geek out on dinosaurs this week in my prep work for my 4e game, because the players time jumped into the past at the end of last session.  As far as I am concerned, if your PCs time travel into the past, there better be some dinosaurs on the other side.  Conveniently I just bought myself a cool book on dinosaurs which I am going to spend the evening looking through, but first I did some internet searches on pterosaurs.

Often Google image searches of real life monsters like pterosaurs or deep sea critters yield some incredible results.  Feast your eyes on this awesomeness (image lifted from this website about pterosaur flight).  It is a dimorphodon. 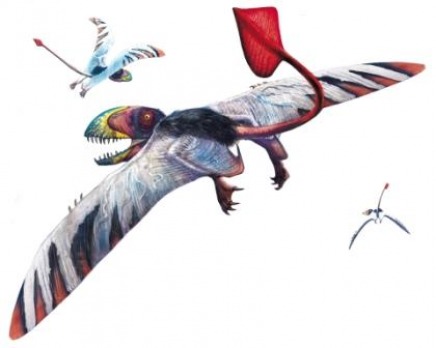 I ended up sketching the dimorphodon picture in my game notes, along with a Quetzalcoatlus (the largest pterosaur ever discovered, with a wingspan that may have stretched greater than 30').  Then my wife got home from work and colored my pen and ink sketches, so I figured I should upload the end result. 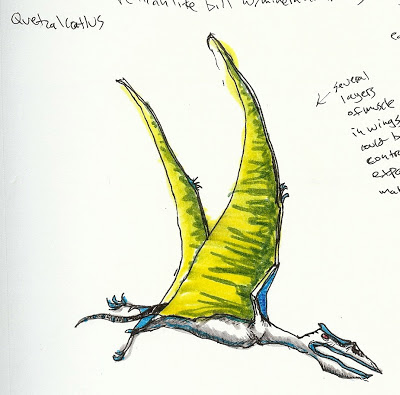 I added a bit of a Pelican like pouch to the beak, because this is the ancestor of the dragons of my world.  A colony of chemosynthetic, heat-resistant bacteria live in and coat the inside of the beak, digesting minerals that the Quetzalcoatlus scoops into the beak-pouch and emitting a flammable gas as a by-product which is stored in special sacks along the neck.  The heat-resistant bacteria also coat the gizzard, and the fire-breathing pterosaur swallows live embers and keeps them in the gizzard until blowing them out mixed with the gas to form a fiery blast. 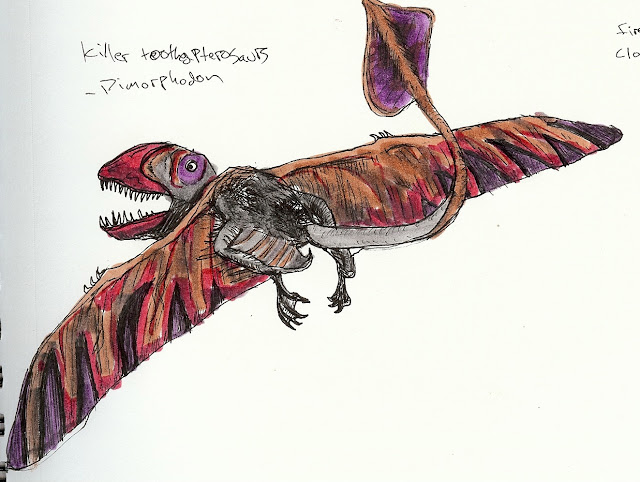 My wife thinks her version is colored "much more realistically" than the original artist's.  She does have a lot of experience handling raptors so maybe I will believe her.
Posted by Unknown at 8:29 PM