The Most Interesting Treasure Trove In The World 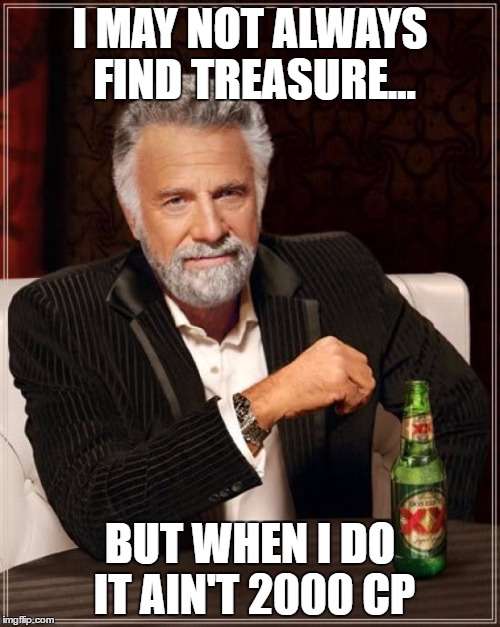 The Dark Fey and their foul creations the Wassermen are evil through and through. Their only
interest is in slaying anyone they come across... especially their neighbors the Draklings. They
cannot be reasoned with and the only communication a party will have with them is being taunted
and threatened.  The Wassermen spend most of their time in the large underground lake and the rest patrolling the underground river system. 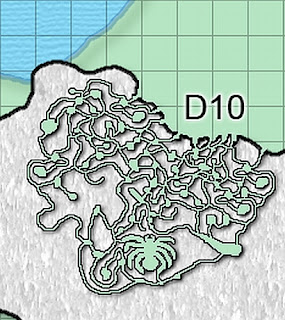 High above the ground, carved twenty feet up the wall above the south shore, there are hundreds of tiny cave
mouths. These are the homes of the Dark Fey.

Clever adventurers may shrink themselves, using magic or the Grow-Shrink Shrooms, to infiltrate the Dark Fey cave system.

The Dark Fey raise tarantula-sized wolf spiders in their cave system. They will attempt to lure intruders deep into the complex to their temple, the large chamber shaped like a spider. The Dark Fey will flee out the far exit of the temple while dozens of wolf spiders attack from their nests in the “arms” of the spider cave.  The Dark Fey keep no treasure in their complex.


Straight from the water near the middle of the north shore of the lake there is a ten-foot cliff leading up into a cave. The Wassermen have covered the surface of the rock in slimy moss to make it treacherously slippery and very difficult to scale. For years the Dark Fey have been hoarding treasure in this cave that they or their Wassermen have salvaged from the Shroomenkin’s dump, stolen from other creatures within the forest, taken from adventurers and pilfered from the surrounding countryside. They spread rumors of their hoard as bait to lure new victims to slay.

Get the Fungus Forest yourself as a pay-what-you-want .PDF with full color illustrations and interior layout at DriveThruRPG.com and find out what other strange delights lurk within!