"People today, the young kids today, are coming into exposure from D&D after having playing games that have very similar themes, often have very similar mechanics ... they understand the concepts of the game. So in some ways they are much more advanced as potential game players. But in other ways, they are also coming from a background that is short attention span, perhaps, less likely interested in reading the rules of the game before playing.

And I'm not just talking about younger players now, but anybody. I know when I jump into a new console game, for instance, the last thing I want to do is read the book. I want to start playing. And that's a relatively new development in game playing and game learning. And we've been working to adapt to that, the changing expectations of the new gamer."

So... one of the design goals behind 4e was to make it so that you didn't have to read the rules before playing?  So that you could just jump into play and go?  Um...
Let me make one thing clear before I go any further.  I am not a 4e hater by any means.  I have played the game, I am currently DMing a 4e campaign, I appreciate it for what it is.  And what it is, is not a rules lite game!  No way, no how.  Even a player with experience in previous editions of D&D is going to face a steep learning curve when thrown into 4e combat.  I don't know how many times now I have reminded my players as they move straight through squares that are threatened by a monster that they are going to incur an opportunity attack.  The guy playing a cleric in my campaign is now in his second campaign and has been playing 4e for months now.   He still constantly forgets that if he doesn't shift back one square when next to a monster, when he uses most of his (ranged) powers he is going to incur an opportunity attack.  Terms like "Close Blast 3" and "range 10 burst 1" are hardly intuitive when you are looking at the text of a combat power.  Heck, looking down at the little cards that are printed out by the character creator it is not at all obvious (until you figure out the color coding) which powers can be used at will, once an encounter, or once a day (yes I know it says what type of power it is, but there are a lot of little blocks of text crammed into those cards...).  And don't even get me started on the use of skills such as dungeoneering or nature to learn about monsters.  Who is going to think to do that if they haven't read the rules? 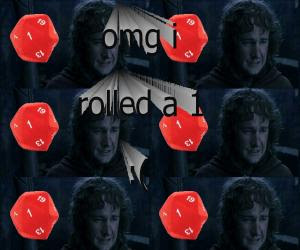 If the designers of 4e were trying to make a game to appeal to "the young kids today" who have a "limited attention span" (which I think is complete and utter bullshit in and of itself, but that is neither here nor there), and wanted to make a game that could be picked up and played without reading the rules, they failed.  Plain and simple.  Total, epic, rolled a natural 1, failure.
Posted by Unknown at 12:53 AM