Long ago, immense trees covered the landscape that is now a high, barren, windswept plateau.  In the millions of intervening years, all traces of these trees have been obliterated... except in one valley that rises from the lowlands up into the nameless mountains to the west.  When an ice dam burst and released a torrential flood from underneath the ice caps above the valley, the giant trees were buried in a slurry of silt and slowly petrified.  As the climate of the world changed and the ice caps receded from the mountains above the valley, the silt filling the valley was gradually washed away by ages of glacial run-off.


The end result is an eerily beautiful sight: an old growth forest, skeletal giants sedately spaced and reaching leafless branches futilely out toward the sun, stands as a mute reminder of a very different time.  Many of these trees were knocked over in the flood, making it difficult to traverse the valley on foot.  Agatization of the trees is quite common, and if some method could be devised to cut the trunks (which reach up to 40' in diameter!) and transport sections away they would be exceedingly valuable. 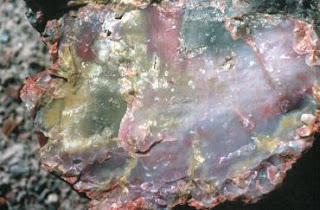 end-on view of a broken-off agatized branch
The valley today is eerily quiet.  This is a result of the gargoyles that perch high in the trees, their stony bodies blending in perfectly against the massive trunks.  The gargoyles may be escaped shock-troops from the wars that ravaged the lowlands, or they may be a naturally occurring result of an environmental magic source in the middle of a petrified forest.  In any case, they are vicious predators that kill anything that moves.  They prefer to let intruders work their way far into the valley before making their presence known, as the gargoyles love the thrill of chasing victims through the difficult terrain.  In a grotesque parody of flesh and blood carnivores, they tear their kills to shreds with their sharp beaks as if they were eating them.
Posted by Unknown at 12:39 AM