Monsters with Powers that Recharge... in OD&D?

One thing that I find interesting about running 4e is the mechanic that allows certain powers that a monster has to only be reused if a specific number or better is rolled on a d6.  In play, this means that some monsters can be radically easier or harder to fight from encounter to encounter simply based on the random bounces of the dice.  I ran an encounter two sessions ago with a creature that had two different abilities that recharged on a 6 on a d6 - and I had an incredible streak of luck, recharging both abilities almost every single round.  This made the fight much tougher than it would have been otherwise.  With all monsters of the same kind having the same amount of HP in 4e, this mechanic still allows for some variety when encountering the same kind of monster for a second time. 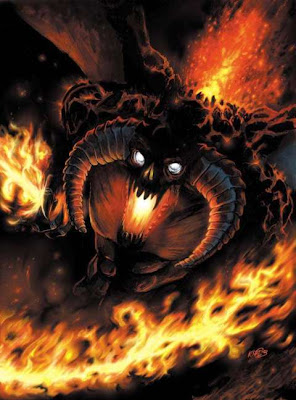 Thanks to Delta's thought provoking post today, I also just realized that the very first version of OD&D (before the Tolkien references were deleted) had a very similar mechanic.  To quote from this thread on Dragonsfoot, a Balrog attacks in the following manner:


"The normal attack is with a magical sword of +1 value, and if the Balrog immolates (any score of 7 or better on two six-sided dice, check each turn of melee) it also attacks with its whip. If the whip hits the Balrog drags the opponent against its flaming body, doing two, three or four dice of damage (depending on size)! In this manner a Balrog can fight one or two opponents at the same time."

This is almost identical to the 4e recharge mechanic, only differing in that it uses two d6 instead of one to determine if the monster can use the power.  Like 4e, the check is made each turn, and like 4e, the power that can be used if recharged is very powerful (in this case up to almost four times more powerful than the Balrog's normal attack!).  The more things change...
Posted by Unknown at 11:23 PM