I have been having a blast lately exploring how magic works in my 4e game with some very receptive players.  I touched on the foundations of a logical understanding of magic in this post a few weeks ago; last session, I introduced a new wrinkle to the subject - shadow transformations of magical energy.  The party had already figured out how to create magical "circuits" with organs that they harvested from the larval spawn of Kariki-Kalos (man, I really need to write a post about how the party accidentally freed Kariki-Kalos and started the end of days happening and all that...); if you point the energy-emitting "light organ" at the "dark organ", the dark organ converted the energy into invisible broadcast energy that could be used to power devices within range.  The two organs, when joined in this fashion to create a circuit, seemed to be capable of generating and broadcasting raw magical energy indefinitely.  As long as the light organ was within about five feet of the dark organ when it was first shined at the dark organ, the circuit would be established and the two organs would begin hovering in place.  As long as the circuit remained unbroken, the two organs moved as one and maintained the same relative position in relation to each other that they were in when the circuit was formed.  The party subsequently created some magical items that relied on this broadcast energy for power, most notably a magical propeller and air heater for the party's hot air balloon.

Last session, the party learned some much more sophisticated ways to create magical circuitry.  A tiny, very fast and very powerful magical monkey (tsoro-tsoro) that the party had rescued from certain death had been collecting spirit beetles (the most powerful single use "magical item" that I have introduced into my campaign, spirit beetles grant wondrous boons when eaten or powdered and smoked but are HIGHLY addictive) for the party in repayment.  The date had come for the party to collect on the debt, but the little tsoro-tsoro was not to be found at its sentient tree home when the party came a knockin'.  The tsoro-tsoro had left them a message with the tree though, regretting to say that he had been ordered to return to the cloud city with his entire spirit beetle stockpile; apparently the elder tsoro-tsoro sorcerers foresaw some calamity coming and were circling the wagons.  Only four spirit beetles had been left behind for the party, but this initial disappointment was soon forgotten when the tree revealed that another object had been left behind as well - a great curved golden shield, inset with an inward curving circular mirror at the top, in the center of which was a great faceted ruby.  The object, buried in the dirt beneath the forest floor for thousands of years, radiating magical energy, had caused this tree to become self-aware after hundreds of years of feeding on its energy through its roots. 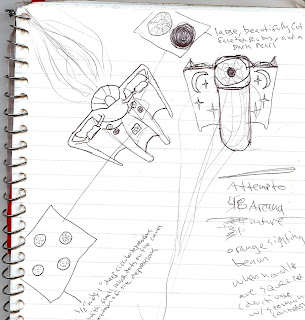 The party set to examining the object, and soon were very confused by it.  It weighed far too much and was too tall to be useful as a shield in battle.  A strange tube like structure on the back seemed to indicate that the device could be mounted on something about the diameter of a telephone pole.  Two matched sets of small rubies and black pearls adorned the back of the tube, and an indented square with four circular depressions was set on the inside edge of the tube.  Two structures that seemed to be handles protruded out from the top of the tube to the edges of the shield, and upon grasping them, the party realized that the entire thing was flexible and could be twisted 45 degrees around the central tube (despite it being made of magically hardened gold).  Squeezing the handles caused a visible beam of light to emit from the large ruby in the mirror - this beam shifted slightly to fall on a startled squirrel in a tree, then tracked the squirrel as it ran for cover.  The party surmised that this was some sort of assisted aiming system, and soon verified that through further experimentation.

Tilia examined the object with her Goggles of Arcana (magical glasses she made from the small dark crystal lenses she found behind the eyes of the larval spawn of Kariki Kalos) and realized that a powerful U-shaped magical battery was inserted into the base of the tube and linked to the four small gems, and then to to the large ruby mounted in the mirror on the front of the shield.  Following the path the magical energy took from the battery, Tilia traced it first to the small rubies (two separate magical circuits, one on each side of the tube), then from the rubies to the dark pearls.  From there, the energy seemed to disappear and reappear in the large ruby; Tilia surmised that the black pearls must perform a similar function to the dark organs and broadcast power.

At first, no one was able to figure out what the four circular indentations on the inside of the tube were for - they each had a bunch of tiny raised dots on their bottom surface, which felt soft and organic.  When Tilia completed the ritual requirements to become a shabori of the fierce people a few sessions ago, she summoned a hekura to live inside her chest.  Her hekura was a nature spirit, and grants her the ability to speak with plants and animals (and take the better of two throws on Nature checks).  Tilia stuck her finger in one of the holes and instantly realized that the textured surface was some kind of mycelial structure.  Speaking with the tissue, she realized that it was a control interface with four separate "communication channels" running from the four indentations.  There was also a fungal "brain" node that seemed to contain a basic physics engine.  The purpose of the mycelial structure seemed to be to activate and control two separate functions of the large ruby; Tilia, after some difficulty in communicating with what was apparently an alien fungal species (which of course made the party think of the satellite footage they had seen while inside the energy ship under the hidden shrine of Tamoachan, when they saw mushrooms sprouting from a fallen meteor, then releasing spores which grew into yuan-ti!), determined that the object could be used both to shoot out a laser blast and to fly, and the propulsion for the flight seemed to be some kind of force ray emitted from the ruby.

Tilia was confused by this, as the ruby itself did not seem to be working any differently when looked at through arcana goggles when in flight mode or when it was blasting lasers.  Tilia could observe nothing at all different in the way the magical energy from the battery was being routed and manipulated in the object on the way to the large ruby that would explain the differing effects.  But there was that gap in the circuit, where the energy disappeared after entering the black pearl and reappeared in the large ruby...  the party had initially assumed this was simply an energy broadcaster or repeater.  But when they attempted to observe the energy as it left the black pearl, they realized that unlike the invisible energy broadcast by the dark organ (which the party could observe by detecting magic), the party could not detect any energy leaving the pearl at all.

Whatever was causing the ruby to emit propulsion rays one moment and laser blasts the next must be happening in the unknown gap in the circuit.  Now thoroughly intrigued, Beautiful Bob cast a ritual that allowed him to see five images from the objects past.  After seeing snippets of its creation, its use in battle (the strange tube part fit over the anaconda like lower body of the yuan-ti) and the spectacularly destructive last few moments of its former owners life, the party had a few more insights into the yuan-ti artifact.  The party had observed yuan-ti scientists carefully using dark-crystal implements to weave shadow sigils over the dark pearls.

Tilia got out some incense that (in addition to creating a long lasting euphoric and mildly sedated state) granted bonuses to Arcana and Religion and soon followed the magical energy into the spirit world.  Looking beyond the spirit world for the first time into the shadow world, Tilia realized that the energy was leaving the pearl and going into the shadow realm, where it traveled down one of two different paths before returning to the physical world in the ruby.  The shadow sigils traced by the yaun-ti artificers had laid down the path that the energy traveled on, and that path transformed the energy as well as transported it.

At that point the session broke down into a think tank, as the party rapidly grasped the promise of this shadow circuitry and started planning on what they were going to do with this new magical "technology".  But first they would have to get their hands on some more black pearls...
Posted by Unknown at 3:38 AM