In part the second I want to introduce a really scary monster that I have not actually had a chance to inflict on my party yet.  Having just blogged about attribute attacks on my other blog, this seemed especially apropos.  Had my Mutant Future party continued to head out into the dry sea instead of investigating a magical portal tree, they might have run into this bad boy if the dice rolled just wrong... 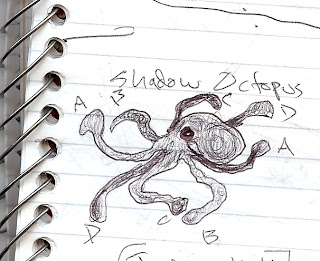 Attacks: 8 x DEX15 range 50' (shadow tentacles) (see my blog post about attribute attacks on my other blog to make sense of this)

Damage: 1 temporary Dexterity attribute drain (lost attributes regain at the rate of 1 per hour outside of the dry sea, but never return in the dry sea or in any other area of strong shadow concentration) + the shadow octopus gains a corresponding point of Dexterity (making subsequent Dexterity attribute attacks more likely to succeed...)

The shadow octopus lurks invisible and nearly insubstantial in the shadowy currents of the immaterial sea.  It can extend its tentacles out to 50', stretching impossibly far, and twinkling ghostly lights from the rims of each suction cup.  It lures prey with the curious glimmering, separating comrades until it begins draining the very quickness from their muscles.  With each point of Dexterity that it drains through its tentacle attack, it becomes more colorful and corporeal.


Special Abilities:  Roll its 8 attacks in two sets of four labeled A-D as shown on the drawing above.  If both tentacles in a matched set hit, the shadow octopus can choose to instantly teleport the two targets into the space occupied by the other (no save to avoid).

Special Defenses: The shadow octopus can only be damaged by mutations, magical attacks or magical weapons.  Normal physical damage has no visible effect on it.

If the shadow octopus is reduce to 20 or fewer HP, it will emit a 50' radius shadow ink cloud, obscuring all normal and magical vision for 1d4 rounds while the shadow octopus uses its sudden jet escape movement ability to disappear into the darkness.
Posted by Unknown at 1:22 AM