I collect monster manuals.  I never use them, but I collect them.  Every now and then I might page through one looking for inspiration, but that really doesn't happen often when I am actually running a game, which I have been doing pretty solid now for the last three years.  So why do I buy monster books if I never use them?  I dunno.  I guess I like monsters.

My campaign worlds always end up becoming more and more bizarre through a process of accretion.  I make up some weird ass shit, my players do things I didn't expect, I riff of their actions and come up with more weird ass shit, and pretty soon there are so many original creations in play that the standard D&D monsters just don't get into the game anymore.

I make up at least 95% of the creatures that my players encounter in game, be it Mutant Future or D&D 4e (the two games I am currently running).

I end up scribbling out crude illustrations for most of my creations, and I thought it might be fun to share some of them with y'all.

- Disclaimer -  I am making no effort to present these according to the standard stat block for either Mutant Future or 4e.  I use THAC0 for my Mutant Future critters, at least in part because I don't use HD (instead writing down a HP range when creating creatures).  I may not use the correct syntax for the 4e creations.


(for Mutant Future or any pre-3e version of D&D) 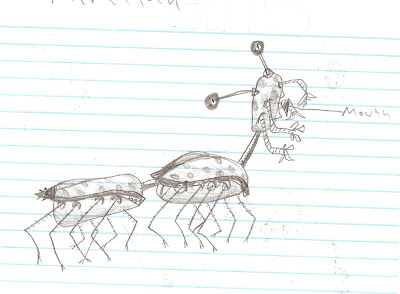 (I love this picture, because it started out as a quick sketch so the players could get a better idea of what the alien bugs looked like, and then one of the players at the table doodled on it and shaded it.  Apparently, Thraxian Hive Soldiers are polka-dotted!)

Thraxian Hive Soldiers can survive in a vacuum without sustenance for years, if that gives you a better picture of these tough son-of-a-bugs.  Although fond of and brutally effective in hand to tentacle combat, Hive Soldiers also carry disruptor pulse weapons.  These resemble a large circular shield grasped with all four tentacles (these contain an extremely dense and heavy power core, and each weapon weighs nearly 200 pounds!), concave side facing the target, which emits pulses that molecularly destabilize the target.

Disruptor Pulse Weapons: Range 1000', half damage to 4000', damage: 5d6, special: Save vs. Energy Attacks or the target suffers an additional 5d6 damage at the beginning of its next turn.  This continues until the save is made.  When not in use these weapons are slung over the back of the first body-segment of the Hive Soldier.

Little is known of Thraxian Hive Society; it is unclear if the bugs are telepathic, or use scent and chemical markers to communicate, or if they are simply so single-minded of purpose and unified in goal that they can act with incredible synchronized precision without any need of communication at all.
Posted by Unknown at 12:48 AM