Why you roll the dice.

My 4e game has become such a whirling engine of death, destruction and cultural exploration that any kind of meaningful session recaps are next to impossible.  There is simply too much going on.

Loyal blog leaders may remember that early on in my adventures as a 4e DM my players found four shrunken heads in a clay basket.  When the party removed the shrunken heads from the basket (which turned out to be an anti-magic basket [if there is one thing I actually hate about 4e it is the treatment of magical items, so I make up my own and have also used a ton of magical plants] that temporarily nullified any magical effect of level 20 or lower within the area enclosed by the sides of the basket), the heads and the party formed an uneasy relationship that has maintained, more or less, to this day.

The exception would be that one of the skulls, Xbalanque, the self proclaimed Keeper of Secrets, disappeared of his own volition a while back.  In exchange for Xbalanque raising a deceased party member, the group agreed to carry a skull-corder enchanted by Xbalanque into a temple they were exploring so Xbalanque could see the carved glyphs that covered the walls (an intense field of magical energy that permeated the temple prevented the shrunken heads from animating within it).  Xbalanque made a point of teaching the party the glyphs that signified the beginning of a long date in the Chitlan calendar, and instructed the party to make sure they recorded everything in a room that contained dates.

The party later learned that an ancient form of celestial magic native to the region is tied to particular dates when cosmic alignments happen.  Vast structures, so large that their shape could only be identified from high in the air, were designed by long dead hands to harness celestial energy and activate when the stars came together in just the right order.  And they had handed the keys to this system to Xbalanque.

Luckily for the party, events in my Mutant Future campaign recently have resulted in the stars "going out" in my 4e campaign, as the 4e campaign world is currently being removed from space and time.  As the stars disappear, the celestial power that makes the monumental magic constructions work has also failed.  A magically engineered insect army that had arisen from the ground under the command of Xbalanque now rampaged out of control on the other side of the mountains from the party, and a lone squad of the insects (I have code named them "Brood X" until the party learns more about their origins) was sent out by Xbalanque, controlled with a magical jade mask mounted on the head of one larger member of the soldier caste.  The party intercepted this group of giant insects as it headed straight for Gadoro island at the confluence of the two rivers that drain the highland areas of the rainforest that the party has called home for the last fortnight.

The party has been getting more and more self-righteously angry at Xbalanque for several sessions now, as he has been totally incommunicado since his disappearance.  You see, as much of a prick as Xbalanque was, and as much of a shrewd bargainer he was when it came to prying out some bit of information from him, the party had grown used to having the long dead sorcerer's shrunken brain to pick.  The party had bent over backwards to accommodate him, had given him everything he had ever asked for, and they have never quite forgiven him for just ditching the party.  Worse, the other shrunken heads had shaken the party with tales of Xbalanque's megalomaniacal tendencies.

Their worst suspicious were confirmed when they discovered that the giant four legged metallic insects that had been carving a path of destruction through the jungle were controlled by their old friend.  Xbalanque did not stop his insects as he barked through the jade mask that he had no time to stand and parlay.  He had to get through the hole in the roots of the universe and undo what had been done.  The stars must shine again.  I am losing control... losing power... I don't have much time 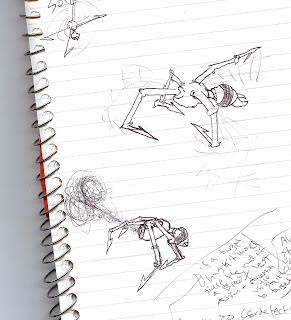 And then Xbalanque ceased communications through the jade mask and the party suddenly found themselves confronted with a bunch of out of control killing machines.  If a soldier lands all four legs strikes in a round and rolls decent damage, it can drop some of the party members in one round.  The smaller bombardier caste were annoying with their chemical heat aura, their stinking gas clouds and their energy laser slices, but in the end their damage output paled next to the whirling blades of destruction that were the soldier caste Brood X. 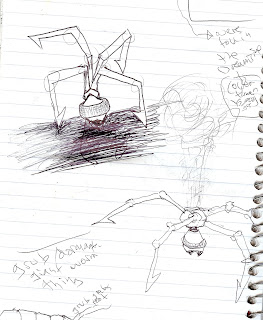 The last two sessions have been bug hunts.  The title of the blog post comes into play due to a peculiarity of the soldier caste of Brood X - any soldier can spontaneously become a new brood mother, gaining the allegiance of all Brood X members closer to it than the old brood mother, and gaining the capability to broadcast a new brood of tiny larvae across the landscape in a great explosion.  The party did not know about this capability.  The exact mechanic is tied to a recharge 6 power I gave the soldiers called "X Blast".  A close burst 5 targeting all enemies in the burst with a single roll for 5d6 damage and curing all allies in the burst of the same amount - but if a natural 20 is rolled on the attack, all soldier Brood X allies recharge their X Blast and use it as an immediate reaction.  If any of those soldiers also roll a natural 20, it spontaneously becomes a brood mother, exploding in a magical blast that first destroys all Brood X insects within 500' and then sucks all that energy back into the new hive mother, who swells, shedding her legs, sticking her head into the ground and raising a steadily growing giant sack of squirming life into the air. 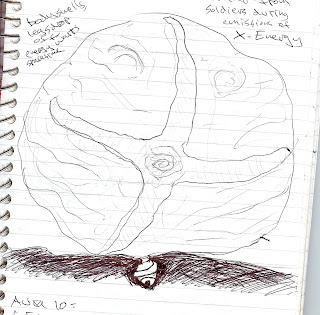 So while the party was dicking around out in the jungle, licking their wounds after their first bug combat, I was rolling to see how often the power recharged as the remaining soldiers rampaged through the landscape, then rolling X Blast attack rolls and looking for natural twenties.

It only took 13 total rounds of player actions (including a five round short rest) before I got the double 20 combination on a recharge 6 power and a tremendous explosion occurred to the south.  A new brood mother had formed, and the pair of soldiers the party had been hunting suddenly reversed course and headed back toward the explosion. The party hightailed it there themselves and beat the incoming soldiers, gaining several rounds to attack the hideous pulsating blob they found in the middle of a totally leveled blast clearing.

And that is why I am glad I actually rolled the dice to see when the new hive mother occurred instead of just going with the statistical average time.  You never know what will happen when you roll the dice.  And often, what happens is sheer dramatic genius.  If I had gone with the average time, it would have been hours until the new brood mother formed, and by that time the party would probably have hunted down quite a bit more of them in the mean time, reducing the probabilities even further.

As it was, we had a great session that ended with the last two Brood X insects psychically dominated by Beautiful Bob and serving the party as mounts as they returned to the native village they have been calling home.  And for once, the party saved the area they were adventuring in instead of scarring it forever!
Posted by Unknown at 10:37 PM