I admit it.  I have totally lost focus.  I had a specific purpose in mind when I started this blog.

I wanted a blog that I could freely publish on without having to censor myself.  I wanted a place where I could reveal the unfinished side of the DM's screen, the teetering construction of notes, drawings and inspiration that existed  in the moments before game night.

I wanted to talk about the thought processes that led to the fun times.  I am a good DM.  I say that without false modesty, and with a confidence that can only be won with the experience of pulling off the successful juggling act literally hundreds of times.

My other blog had become a place that only reflected the amazing polished creation, the session, the actual living drama, the flesh of the god of RPG's.  The ongoing story, narrated by players and DM alike.

No, I wanted a blog that I could publish the unfinished bits and pieces to, without fear that a player might stumble across the blog and learn the secret before I figured out where exactly to insert it into the ongoing campaign.

As it has happened, this blog has kind of become my default 4e blog, because I was just beginning to dabble in playing and DMing D&D 4e when I first started writing this blog.  This has meant that I have, indeed, been censoring this blog so as not to blow some major secrets of the campaign.  It has also resulted in some session recaps, which are (of course) exactly the finished process kind of stuff that I was trying to avoid with this blog.

I want to get back to the unfinished and process-oriented goals of this blog.  This will probably mean less material directly focused on the unfolding events of my 4e game, and more posts on my observations as a DM and wanna-be game auteur.  Or maybe it will mean that I quit giving a shit if any of my 4e players see this and post anyway!  Maybe a simple warning at the beginning of a post.


But enough about that.  Today I want to talk about ethnographies.  An ethnography is a written description of a human culture distilled from the research of an anthropologist.  You can find ethnographies at any used book store in a college town.  They almost invariably look like the one below, varying only in the subject matter and the color of the cover. 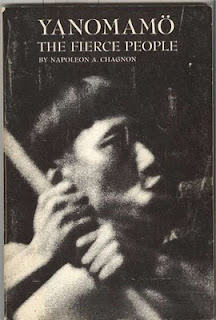 I collect ethnographies, and I think any DMs reading this out there in blogland would be wise to do so as well.

You see, the thing is, people are crazy.  You may think you have a wild imagination.  Your late night inspiration, your fantasy creation, pulled from literary inspirations, movies, from past campaigns... sorry to tell you, it doesn't hold a candle to the real thing.

With that in mind:  Ethnographies are the DM's best friend!


They will typically be about 100 pages in a format very similar to the LBBs.  They will contain a distillation of a human culture which can easily be grafted onto any race in your campaign world.  They contain a cosmology, not just gods and spirits, but a description of how the divine is viewed, and interacted with, and impacts day to day life.  They will tell you about a human adaptation to an environment, culturally and technologically, that enables the culture to derive sustenance from the land.  They will contain descriptions of ceremonies and feasts.  They may contain titillating details of secret societies, fraternal organizations, magic spells and witcrcraft.  But most importantly, they will teach you that EVERYTHING that we take for granted as "normal" would most likely be completely different in a monstrous or alien culture.  What does brother or sister mean?  I assume that you and I share a similar definition for that term.  What does marriage mean?  Are humans immortal (can they die from natural causes)?  If it surprises you that the answers to all of these questions vary dramatically across human cultures, than I suspect the fantasy cultures and monsters in your RPG life are probably far too vanilla.

I use my ethnographic collection much more often than I use my vast RPG library, and I have never paid more than $10 for a single one (and most were far cheaper, if you don't mind a dinged up cover or high-lighter covered text).  As an example, the players in my 4e campaign have been getting to know the Yanomamo indians of Brazil and Venezuala as they are presented in Napolean Chagnon's famous ethnography, Yanomamo: the Fierce People (at the time of my typing, this link leads to an amazon.com page for the exact same edition I own, pictured above, used, 11 copies, starting at $1.90!).

The party has been staying in a Yanomamo village for several weeks of game time, and one party member has even completed the ritual fasting and drug taking requirements to become a shabori (sort of like a shaman, basically someone who has invited a spirit or hekura to live inside him [this is a male tradition] which can then be exhorted to cause harm to enemies or protect allies).  I have implemented the Yanomamo cosmology with the 4e mechanical engine quite easily and effectively.  Hekura cost the permanent loss of a healing surge when they call your chest their home.  They grant an encounter power that can be used as a minor action, and in my game, that encounter power is related to the particular manifestation of energy that the hekura represents.  I tend to use real world sources as inspiration, not doctrine, so I riffed on the idea of hekura a little bit.  In my 4e world, hekura are tiny spirits that each represent one particular form that energy can take - so there are lightning hekura, curative hekura, disease hekura, fire hekura, dance hekura, song hekura, etc.

This post has almost made me want to do a series of posts drawing from my collection of ethnographies. A distillation of the ethnography into the bits that are most interesting for game play.   I would probably start with the Igbo of Southeast Nigeria.  Or possibly the Mardudjara aborigines of Australia.
Posted by Unknown at 3:35 AM