Sometimes being a DM in the age of the internet feels like cheating.  I'm rolling the dang d30 every time behind the screen and no one notices because everyone is doing it.  I posted a while back about how the internet is a megadungeon.  My new Mars 1990 campaign idea has led me down a tunnel into some interesting caverns lately, like this amazing series of posts at alternatehistory.com which will give me some good starting points for my alternate history space race.  A real life space historian runs a simulation game with five Russians and five Americans players modeling national civilian and military space programs; they have gotten through 1973.  I am certainly not going to go to that level of detail but I do want to do a little reading up on the subject.

Heck, just looking at Wikipedia's broad outline of Cold War events in the 80's gives me a million ideas for the campaign. I have to make some big decisions.  Is George H. W. Bush going to be the President in my game?  I am also very much considering running both US and USSR groups of players through the same campaign.  I have been wanting to finally jump into Google+ gaming and this will be the perfect excuse.  I am envisioning the two parties as ultimately becoming bitter rivals in the race to unlock the secrets of the Martian megadungeons.  I will track time for both parties so that I can tell who gets where first. 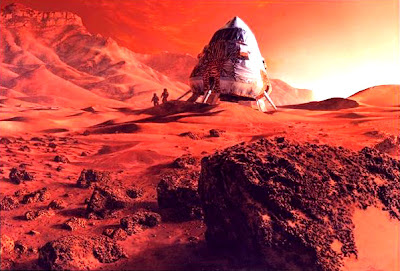