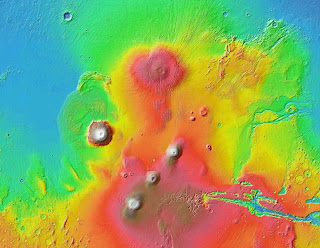 Holy crap!  I had no idea there was a Google Mars.  Google Earth was an incredibly useful resource for my Mutant Future campaign and if I end up running with my new alternate history Mars in 1990 campaign idea I know that Google Mars will be just as awesome.  The links to articles and stories on prominent Martian features are excellent starting points for more inspiration.

Google Moon is pretty cool too...

There is a tutorial video at googleplanets.com which explains what you can do with Google Mars, Google Moon, and Google Sky.  It does not mention using these free tools to help run a cold war sci-fi game, but it probably should.
Posted by Unknown at 10:35 PM