These are truly horrifying monstrosities, brought up from the depths by the great orc warlord Sally Forth (Sally was named after the war cry of the humans his father fought on the frontier).  Shortly after Sally was possessed by the river god Xylitin and became obsessed with destroying the dam and unchaining the river, he disappeared into the tunnels under the orc warrens and was gone for months.  He finally emerged leading three baby beasts out, having slain their mother in a truly epic combat.  He raised them by hand and trained them to become the pride of the orc army, instrumental in uniting the warring factions and raising the great army of hill and grey orcs that did finally overrun the defenses of the dam and set the river free. 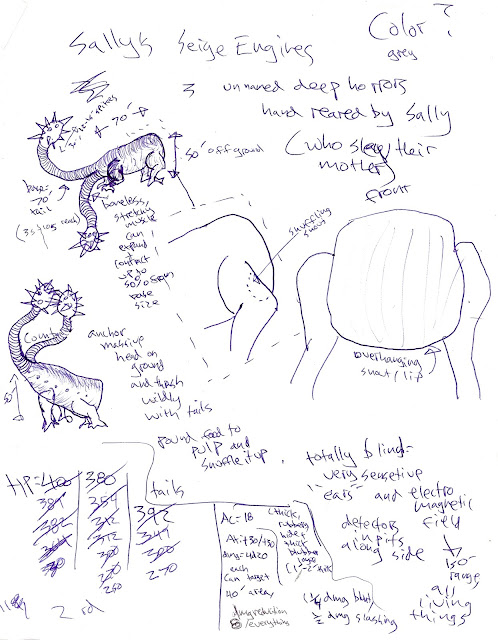 They are eyeless and shaped much like a sperm whale in the body.  They have thick legs and two boneless, muscular tails that can expand and contract up to 50% from their base length of 70' (giving them a maximum range of 105').  A 30' club with 12-15' spikes caps each tail.  Their only attack form is to anchor their massive head on the ground, raise their tail end and thrash wildly with their tails - each tail can target a 40' diameter area and one attack roll serves against all targets in that area.  While it is not particularly hard to hit them, their hide is thick and rubbery and they are protected by a thick layer of blubber.  They sense their prey with sensitive "ears" (pits along the side of their body) which can pick up vibrations, odors and electro-magnetic fields.  Much like a shark, they go into a frenzy at the smell of blood and will seek it out.  They pound their prey to a pulp and then snuffle up the bloody remains with their toothless mouth.

Play Notes:
The siege engines in play made quite an impact. Two members of the party had been previously shrunk to the size of grains of rice and cast into the pit that served as the siege engine's home in the orc encampment, so they already had a healthy fear of the creatures.  When the orcs finally descended down the mountain pass, the defenders of the dam met them at the narrow gorge that they must funnel through, at the point that so many orc invasions had been stymied before.  This time, the orcs stayed out of range and sent a score of naked berserkers running down.  These frothing maniacs were whipping themselves with thorns as they ran, leaving a trail of blood behind.  As they neared the gorge, a hail of arrows rained down but the orc beserkers were in a frenzied state that propelled them forward with the blessings of their god even as their bodies suffered mortal wounds from the arrows.  As they neared the massive logjam that choked the gorge, evidence of an ancient flood, each berserker grabbed a bladder that had been tied to its back and hurled it at the logjam.  The bladders burst and covered the ancient petrified trees with blood.

The defenders were quite confused about what was happening until the siege engines were brought forth from the rear of the orc position.  The lumbering behemoths followed the bloody trail left by the berserkers, ignoring the arrows and lightening bolts that rained down from above, and began to smash the logjam with their tails.

The defenders that were holed up among the ancient tree trunks fled as the siege engines smashed a broad trail through the logjam, pausing only to snuffle up the remains of the unfortunate ones who could not scramble out of the range of their deadly tails.
Posted by Unknown at 3:20 PM