I loved the concept of the one page dungeon that swept through the blog-o-sphere this year so much that I traveled back in time to 1993 and created one of my own, placed it in a folder of gaming material and left it to be found by my future self in the year 2009!

I made this map when I should have been doing some work in computer class back in 1993; it is little more than a map and key with monster locations, but I clearly remember the ecology of the cave complex and will explain its intricacies. 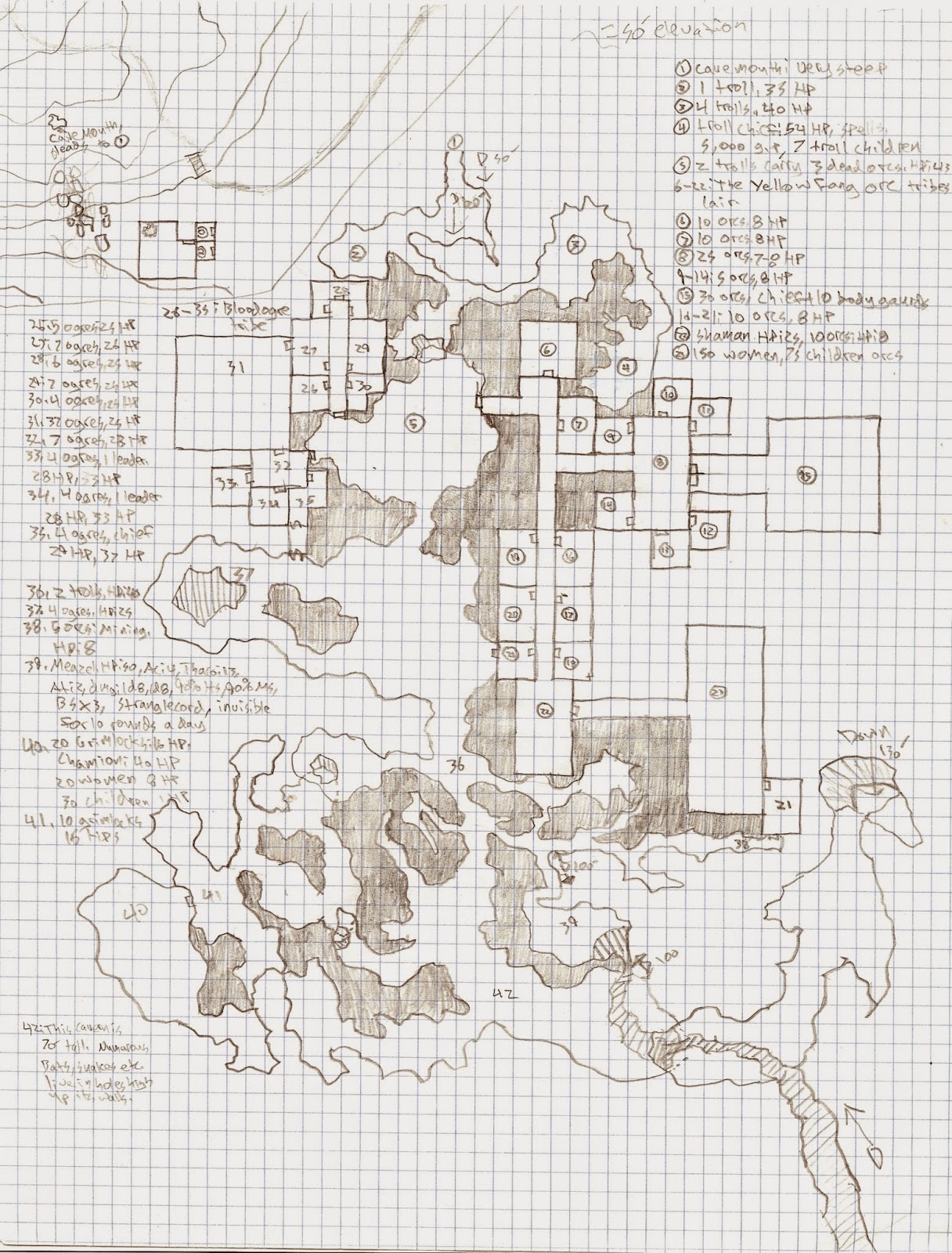 The upper left corner of the map depicts the mountain side outside the cave complex - each concentric line represents 50' of elevation.  A path crosses a gorge underneath a simple stone building that housed the workers who were expanding the natural caverns - the two small rooms accessed by doors to the outside are toilets, with oubliettes indicated by a circle with a D inside it.  An avalanche has descended down the mountainside to the west of this building, and has partially obstructed the cave mouth.

A "D" followed by a number indicates a drop of that number of feet over the length of the arrow that follows (see "1").  Directly inside the entrance is a very steep slope, far too steep to walk down.  Confusingly, I used a fill in of vertical lines to indicate both water (there is a pool in cave 37) and the sides of a vertical drop (the cave that opens to the south between 2 and 3 has a vertical drop down to cave 5).

Caves 2 - 4 are the home of a small band of trolls that terrorize the other residents of the complex - as the note for "4" indicates, their chieftain knows "spells".  True to one page dungeon form, these spells are not detailed!
The large caves below, 5, 36, 37, 42 and the unmarked caves between 36 and 42 are the hunting grounds of the trolls, who ambush any unlucky orcs, ogres or grimlocks that venture out to fish in the river or harvest the edible fungus.  The trolls wandered in one day from the mountainside and found easier hunting in the cave complex, so they stayed.

The finished chambers numbered 6-22 are the home of the Yellow Fang orc tribe, the first to move into this complex after encountering and killing the humans who were building a stronghold here.  There are a total of 122 male orc combatants, 150 female orcs and 75 children.  They war with the ogres for control of the other section of finished chambers - they are a smaller outpost of the main tribe which lives farther down the underground river that flows in from the south of the map.  They also mine for iron ore (which they use to manufacture weapons) in the section of tunnel marked 38.

The finished chambers numbered 26-35 are the home of the Blood Ogres, a savage group numbering 87 combatants (including females, who are every bit as dangerous as the males).  While this force certainly could destroy the orcs in an open confrontation, the orcs use superior strategy and ranged weapons to enforce an uneasy stalemate.  This is helped by the trolls who kill ogres and orcs alike when they find them out in the caves.

A meazel lurks invisibly near the bottom of the steep slide down to cave 39 - he occasionally exits this area and hunts through the complex.  He is greatly feared by all who live in the caves; while they do not know what he is, orcs, ogres and grimlocks alike have legends that speak of the curse of the caves, a silent death that comes out of nowhere to the unwary.

A small group of grimlocks lives in cave 40, with a group of warriors constantly standing vigilant outside the door in cave 41.  The grimlocks are starving and are on the verge of being wiped out by one of the more powerful factions.  There are 31 grimlock combatants, 20 females and 30 children.

Numerous holes and crevasses link the high ceiling of cave 42 with the mountain slope above, and bats, snakes and other small creatures seek shelter from the mountain storms in this cave.  Along with the fish in the underground river and the edible fungus that abound in the caves, these creatures form the only food besides slain enemy combatants for the residents of the cave complex.

Well, that's that.  Certainly not a masterpiece of dungeon construction or even a particularly interesting cave and chamber complex, but as a relic of my gaming past it holds a certain fascination for me!
Posted by Unknown at 12:12 AM

Email ThisBlogThis!Share to TwitterShare to FacebookShare to Pinterest
Labels: one page dungeon, RPG