So I was making a really kewl boss creature for my 4e game (a shadow demon that has been slowly coming through into this world by taking over the body of Hammer, a warforged barbarian in my game, who brought this on himself by knowingly drinking what I had described as the "amniotic fluid of an elder frog god" just to see what would happen...) because the party has finally crossed the mountains and located a shabori (shaman) who can help them expel the demon from Hammer. 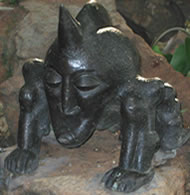 The party has been told that enough of the demonic entity has already crossed over into this world that it will be a horrific struggle when it emerges from the body of their friend.  I gave this baddie some amazing mind-bending and terrifying powers, and after the party faces it tomorrow I will post a little write up of the demon because I think it is an excellent example of how to make a 4e creature that is terrifying and fun to fight without it being a slog-fest of slowly chipping away hundreds of HP.

I decided I wanted a good "authentic" demon name, a name that the shabori could let slip in the village and all the natives would freak out and chase the party away and make them perform the exorcism out in the middle of the jungle.  I googled "indian names for demons" and found a resource that I am going to come back to over and over again, a Demon Dictionary.  Check it out!  Demontastic.  I came up with "Tchort", a Russian name for Satan, which apparently translates as "Black God".
Posted by Unknown at 3:00 AM No comments: