The players in my 4e game are mucking around in a loose analog of Tikal (see this text and image dump post for some Tikal flavor) I am referring to as the Huwawa complex after the imprisoned godlike force that is bound below the lowest dungeon level. 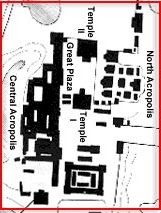 I used the central structures of Tikal for the surface layer, with a 3 level dungeon underneath.  I sketched the dungeon maps free hand in isomorphic view.  I added the graph lines by hand.  I was a little drunk when I laid down the original perspective lines and in many cases they vary wildly from true.

I scanned in the maps and messed around with them for a minute in Photoshop.  This first one is color coded by level depth: Blue = Level 1; Green= Level 2; Red=Level 3; and Yellow=Level 4 (the very surface layer of the imprisoned entity below the dungeon levels). 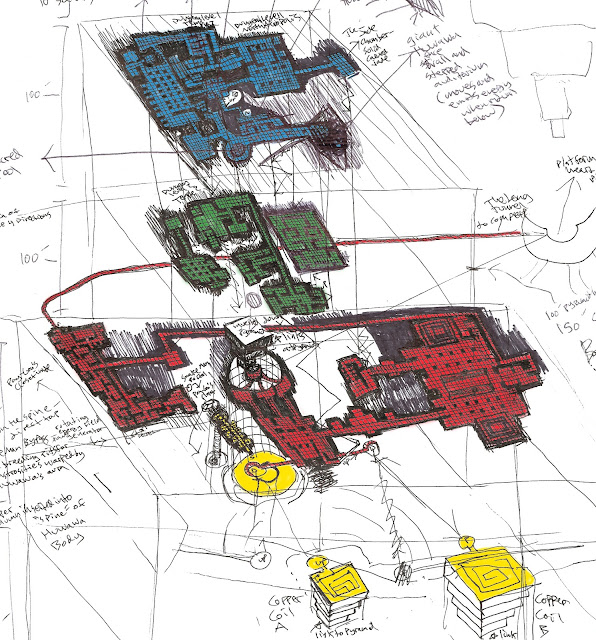 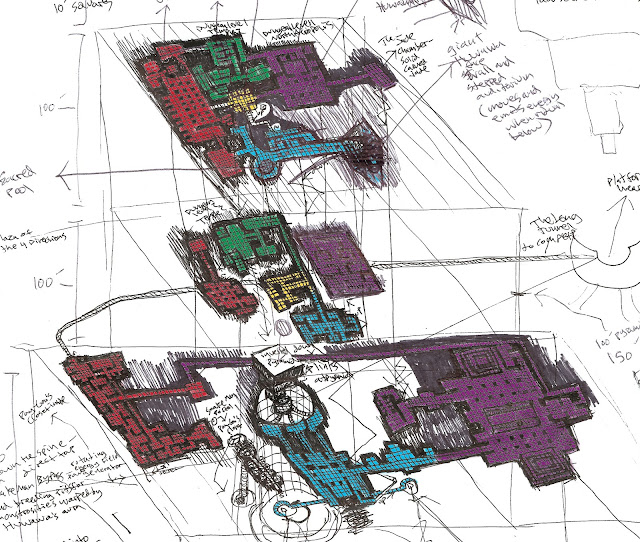 The awesome thing is the party actually has architectural plans of the complex from the library they looted a few sessions back, so this post isn't even technically a spoiler!  Of course, the party managed to figure out a way to use the solid jade portals that only allow the dead to pass through them, so they have been teleporting all over the dungeon using the lich doors and they probably won't even end up seeing most of the place before they get the loot they came for or die trying.
Posted by Unknown at 12:00 AM No comments:

I started to write a comment in response to this sentence of the post:  "I'm curious as to how this works out logically, however.  Not that I feel the game has to be 'logical,' but since experience points represent, well, experience, how exactly does one become LESS experienced in the process of gaining a better strength or a nice new gnoll knee knocker?"

On the odd chance this was not a rhetorical question, spending experience points to gain some specific skill at the cost of not advancing another skill as fast or even deteriorating another skill, makes perfect sense to me.  The basic situation as I understand it that you are presenting is a PC spending XP on some bonus ability rather than on leveling up (leveling up being defined as a different set of ability increases).

I have played guitar for going on 17 years now, and in general you could view my playing career as a steady increase in experience and ability, with new levels of expertise achieved over time.  Your traditional D&D model.

Now since this is real life of course I do other things besides just play guitar.  For the last year I have spent comparatively less time playing the guitar, I have not been performing live, I have not been recording, and I have spent much more time at a new job (a salaried position, which has turned out to be a terrible idea in terms of the amount of time I put in).

In game terms, I spent my XP points from this last year of living on a bonus profession to earn me more money rather than continuing the obvious point of the game, to perfect my guitar mastery :)

Perhaps I might have achieved name level this year in guitar if I had not spent my XP on this arcade game of a job!

What has happened to my guitar skills in the meantime?  Can I and do I pick up my guitar regularly and make beautiful, high level music?  Sure!

Is my playing ability at the same level it was when I was devoting much more time to it?

Have I in fact slipped slightly in some measurable levels of player ability due to spending more of my experience points picking up a whole host of new skills related to my new job?

Yes.  Sometimes the run that I hear in my head stutters on the way to the fingers and I end up having to slide a half step to cover a missed note.  My hands are physically weaker to the point that when I get on my friend's bass guitar and jam for an hour my hand feels like it is going to cramp up and my fingers burn.  My calluses are gone.  I am not placing the meat of my fingerpads precisely at the point where the note will sound true and not buzz or vibrate.  The unique vibrato muscles in my left pinkie finger seemed to have almost completely deserted me.

I feel that XP purchase systems are almost always more "realistic" than the standard D&D level up method. That is not to say they are actually realistic, but if they take into account that the average person is simultaneously bettering many skills and letting many skills slip out of practice, they have a massive leg up on D&D with its strange idea about classes.  You could hardly come up with a more unrealistic way to model humans gaining experience than the D&D class based leveling up system.
Posted by Unknown at 12:24 AM 5 comments:

Prep for next session


"The Maya dead were laid to rest with maize placed in their mouth. Maize, highly important in Maya culture, is a symbol of rebirth and also was food for the dead for the journey to the otherworld. Similarly, a jade or stone bead placed in the mouth served as currency for this journey. Often, whistles carved from rocks into the shapes of gods or animals were included in the grave offerings to help the deceased find their way to the spirit world. The Maya associated the color red with death and rebirth and often covered graves and skeletalremains with cinnabar. The bodies of the dead were wrapped in cotton mantles before being buried. Burial sites were oriented to provide access to the otherworld. Graves faced north or west, in the directions of the Maya heavens, and others were located in caves, entrances to the underworld.
Burial practices of the Maya changed over the course of time. In the late Preclassic period, people were buried in a flexed position, later the dead were laid to rest in an extended position. In the late Classic period, the elite constructed vaulted tombs, and some rulers ordered the construction of large burial complexes. In the Postclassic period, cremation became more common.

There have been many archaeological discoveries of lavish tombs within ceremonial complexes from the Classic period. However, only a Maya city’s most important ruler was buried in this way. These aristocrats were placed in tombs at the bottoms of funerary pyramids that sometimes consisted of nine stepped platforms, perhaps symbolizing the nine layers of the underworld. Other temples were constructed with 13 vaults the symbolizing the layers of the heavens in Maya cosmology. These temples reflected the continued worship of these nobles. In some instances, members of the royal family or young attendants would be sacrificed to accompany the lord in death.
The tombs were filled with precious goods including fine polychrome pottery, effigy figurines, jade and marble pieces, masks, mushroom figures. While these figures were found in Maya tombs, many of these items were also used in the service of food, drink and for additional ritual purposes.[1] Obsidian and exotic shells have also been found in Mayan tombs.
Other elite members of society were buried in vaults. The bodies of higher-ranking members of society were buried inside sarcophagi. They sometimes were buried in crypts or underneath the family home. These funerary constructions of the royal often destroyed the residence itself. Commoners were also buried near or under their houses. These graves did not have extensive burial offerings, but often contained objects that identified the individual: a tool or possession."