Another old map. This is one of two maps that I made back in May of 2009 for the now defunct megadungeon.net project that James M. had going on.  I don't think this one ever was keyed, or if it was the key never was put on the website before it was taken down and James never forwarded it to me.  Click this link for the full size image in a new tab. Here are the original instructions from James M. that I worked off of to make this map:

"Let's go with the Saint's Shrine, which is wholly man-made level without any cavern areas. There's one connection to the Bulwark above it and two to the Last Stand below. As I envisage it, the highlight of the level is the Shrine of St. Gaxyg, which is a large, temple-like structure at the heart of the level. All the other rooms should be arranged in a defensible fashion around it, providing fall back positions the monks could use if creatures from the lower levels invaded. There should be lots of secret doors, hidden rooms, twisting corridors, and the like."

After I finished the map, I gave a brief explanation of the map to James to pass on to whomever he had lined up to key the level:

" I designed the level with the idea of the monks' defense foremost in my mind, so in some places it might be a little more linear than I might have otherwise done. The central shrine itself I made fairly interconnected, but there is only one exit (strafed by arrow slits) to the rest of the level from the shrine. A few notes to pass on to the person keying the level: I imagine that the secret doors in rooms 10 and 1 would be relatively easy to find from the inside, as they were designed to conceal the way up from outside, not to prevent people from coming down from above. However, if a party does not find them they might wrongly conclude that this is only a small sub-level and that might be interesting as well. The large pool of water in chamber 67 held back by the floodgate is ten feet deep. At ten feet deep it contains exactly enough water to fill the passageway it floods into from floor to ceiling assuming a ten foot ceiling for the passageway. The staircases down to that passageway should drop at least ten feet of elevation so that the water would be contained in that passage. I envisioned that the flooded passage would slowly drain out over the course of several days through small cracks where the wall joins the floor, and the pool will refill slowly from an enchanted basin affixed to the bottom of the pool (of course the level keyer could change any of that). The floodgate itself gets pulled up a slight incline to open it, so if the winch is released the floodgate would slide back down to its closed position. The many pit traps throughout the level could be relatively deadly to a party (depending on their depth, spiked nature, etc) as several are in positions where you might not expect one (directly in front of a door, for instance); I envisioned these pits as part of the defenses of the level as the monks could easily avoid them through the many secret passages. Of course, I could remove any or all of the pit traps as requested. The eastern exit to the Last Stand is guarded by a stretch of passageway with murder holes in the ceiling; room 99 is above that stretch of passageway, I tried to make that clear on the map but it may look a little confusing; the passageway from room 98 to 100 goes underneath room 99. Once again, I went a little over the suggested room count at 101 numbered chambers"

Below is a detail of the shrine of St. Gaxyg: 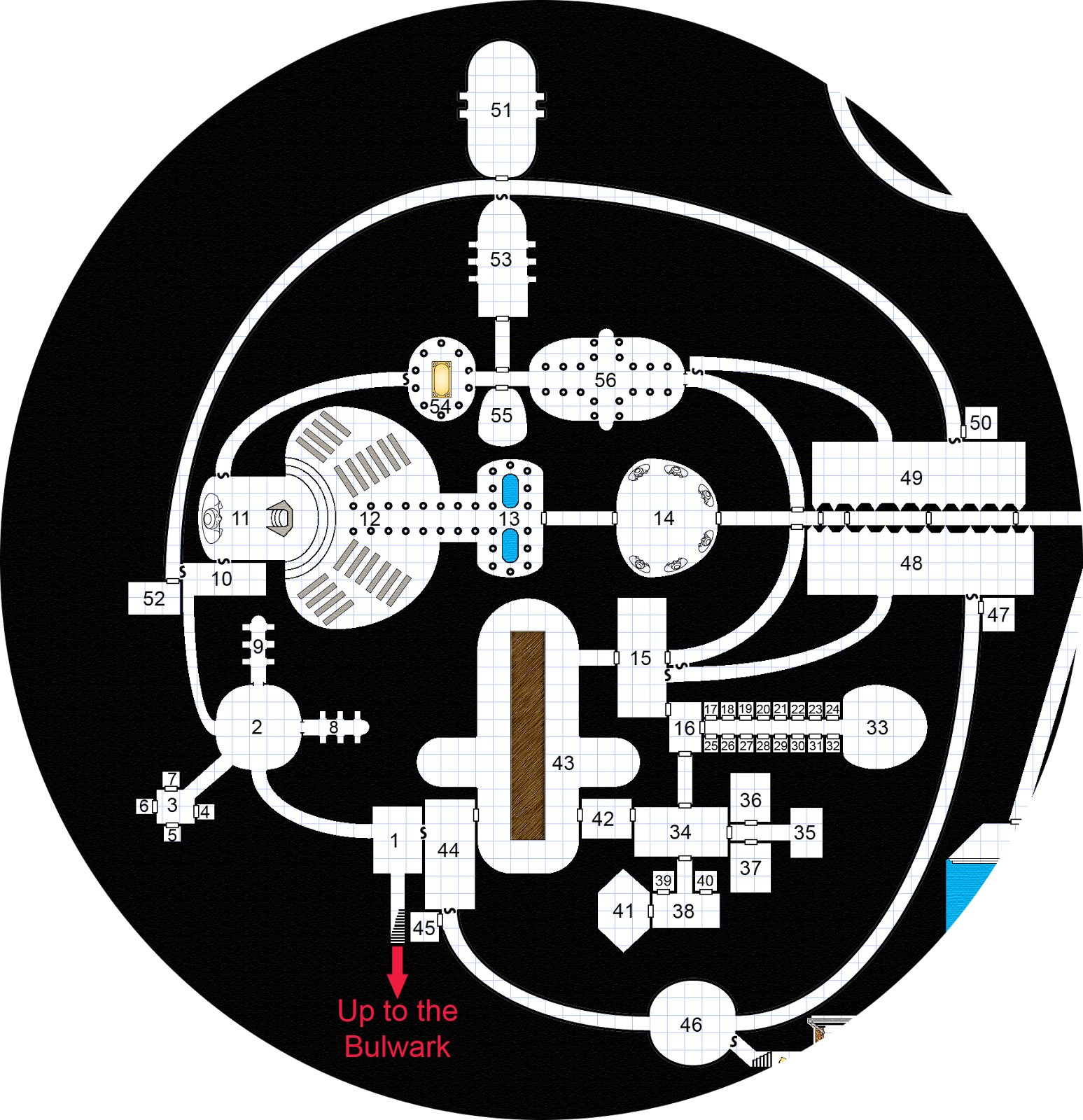