Bororo Indians of the Amazon

I am currently reading Tristes Tropiques by Claude Levi-Strausse, coming to this book after reading his Mythologiques series, which introduced me to the Bororo.  English language Wikipedia is particularly uninformative on the Bororo, but I found some other websites and even some full text scholarly articles online that filled in some of the gaps from the Levi-Strausse reading.  I have an ongoing Google Document (shared below) that I am using as a research file, dumping links, sources and information into it as I read (I cite the source above the information gathered from that source -  some information  is paraphrased and some is direct quotation from the source material with some deletions/abridgment).  Here is the link: Bororo Research Document 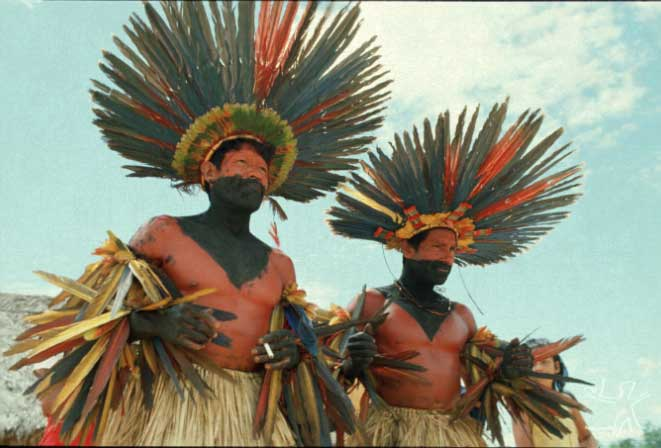 The division of each Bororo village into 8 clans, four each in two opposing moieties (Cera and Tugare) makes for ready made inter-village tensions and adventure opportunities.  Despite a traditional hierarchy of the clans, each clan negotiates its own fortunes in each particular village and strives to gain more power in the form of access to new magic and clan roles.  I particularly like how each clan has unique/proprietary decorative ornaments and magical markings to use on weapons and as body paint.  I see each clan pattern bestowing a minor magical property onto the decorated spear, ornament or body (e.g. +1 to AC; +1 to hit and damage; double normal weapon range; +2 to STR; +2 to DEX; +1 attacks/2 rounds; cast a cantrip 3x/day; cast a 1st level spell once/day; etc.).  Bororo believe in reincarnation as part of a complicated transmigration of souls (Bororo souls also pass into animal bodies after death and before returning in reincarnation to a new human body).  Each Bororo shares the name of and is thought to be a partial reincarnation of a dead ancestor.  I think encountering "normal" animals with a Bororo transmigrating spirit could be fun (perhaps human intelligence and one or two minor magical powers for these animals), and then meeting the same spirit reborn into a young Bororo could be good fuel for gaming.

PCs will either encounter the Bororo out in the jungle/on the river, or at the Bororo village. The Bororo spend more than half their time on average outside of the village.

8-12+ Results: Outside of Village (more common in wet season)


Clans encountered outside the village = one or two of eight unique clans, each clan with its own: proprietary names; tribal roles; magical decorations/signs on weapons and utility tools; magical stories and songs; personal adornments/body paint.

(The following largely after Levi-Strausse):

The village will have at least one hut representing all eight clans, and it is more common to have several huts per clan, representing sub-lineages of the clan.

The village is divided in two by an imaginary line between the Cera moiety to the north and the Tugare moiety to the south. Clan houses form a ring around the men's house in the center of the village. The central plaza is the bororo. Many important rituals are regularly performed in the bororo, especially funerary rites which can continue for months after a death.

Moieties and clans are exogamous, matrilineal and matrilocal.  When a man marries he crosses the line separating the two moieties and goes to live in the hut belonging to his wife’s clan.  But in the men’s house he continues to have his place in the sector assigned to his own clan and moiety (his mother’s clan/moiety). The men’s house internal arrangements mirror the village at large - to the north the Cera men and to the south the Tugare.

Clans are divided into subclans and lineages.  Each clan is ranked and certain positions in the village can only be held by members of particular clans (e.g. Village chiefs must belong to a clan of the Cera moiety).  Each clan has unique emblems, privileges and taboos related to the technique and style of manufactured objects, as well as proprietary ceremonies, songs, proper names and access to medicinal plants (e.g. Tobacco is associated with Bokodori clan, other aromatic plants smoked in a similar fashion include an anonacea controlled by the Paiwe clan).

Men cannot talk to women of the other moiety in public - even husband and wife would not bandy about in public, only being seen together in public when they leave the village to hunt, fish or gather together (which is seen as private).

Clothing/Personal Appearance:  Men are usually naked except for penis sheath, but sometimes (and always on festive occasions) wear elaborate ornaments made of fur, multicolored feathers, or bark painted with various designs.  Women wear a slip made from white bark (black when they are unwell) and a high girdle/corset, also made of bark, but dark in color.  Feminine ornaments consist mostly of cotton straps colored with red urucu, and of pendants and necklaces made from jaguar’s fangs or monkey’s teeth, worn only on feast days.

Posted by Unknown at 1:34 AM No comments: