Temple of the Dragocroc - Isometric Graphing

All hail Dragocroc!  I hadn't been exposed to isometric graph paper until I saw some Dyson Logos posts that inspired me to check it out.  I found a website with printable isometric graph paper and printed some out.  I present the Temple of the Dragocroc in isometric pseudo-3D view. This started out as doodling without a plan, and as consequence I have gone past the edge of the graph grid in a few places.  I am going to keep working on the original drawing but I also scanned it in and messed around with it a bit in Photoshop just for kicks (Photoshopped scans at bottom of post, unaltered scan of work in progress immediately below).

There is 10' of liquid demonblood flooding the inside of the walled structure. I hinted at the towers and walls extending down past the interior surface area to suggest that it was a liquid surface, but this will be more obvious when I finish up the outer walls and color in the surface of the blood. I am thinking of using colored pencil for the demonblood surface to get some good color swirls going on.  The blood spills out of the mouth of each of the Dragocroc statues down past the tower level immediately below them, landing on the third level up from the bottom, flowing through a channel system to waterfalls that cascade down each face of the tower.

The four Dragocrocs that make up part of the 5th tier of the temples are stone statues inlaid with jade mosaic.  The red eyes are unnaturally large glowing rubies (single rubies each ~10' long, each 1/8 of the heart of the real Dragocroc (powerful demon bound below).  If the ruby eyes are replaced in the heart of the real Dragocroc,  the demon will arise, drink its stolen blood to restore its power and utterly destroy the entire structure and surrounding countryside before embarking on a murderous rampage.)

The only entrances to the structure are on the fourth and fifth tiers.  Archways open into the tower face on the fourth tier below each Dragocroc mouth.  Each archway leads to a staircase that ascends the inside wall of the tower, giving access to the fifth tier and the walkways on top of the Dragrocroc statues.  Open archways at the base of the tail-spire give access to an empty stone room with a sacrificial alter in the center and an engraved circular trench around its perimeter, the Blood Circle.  The blood of approximately 20 human sacrifices is required to fill the circle.  If the sacrifices are performed under the light of a full moon, the Blood Circle can be used as a powerful summoning and binding focus and a teleportation circle (giving access to the dungeon levels inside the blood-drained and bound Dragocroc demon imprisoned below).  20 ritual spellcasters are required to use the circle for summoning and binding, and 20 sacrifices is the minimum needed for this use.  Every multiple of 20 sacrifices beyond the first 20 increases the power of the circle when used for summoning and binding.  Priests of Dragocroc carry amulets which are linked to the Blood Circle.  Chaotic individuals who hold an Amulet of Dragocroc can sacrifice 1d8 HP of blood to the medallion to teleport without error (including all personal gear and up to two other individuals, unwilling individuals can save to resist) from unlimited range to the circle on the 5th tier.  There is a 1 in 6 chance every time anyone who is not a Priest of Dragocroc picks up an Amulet of Dragocroc that the amulet attacks as an 8HD monster for 1d8 damage and teleports the victim to the circle (save to resist).

The real Dragocroc is a powerful demon, summoned and bound by a cult which stole its blood to power their magic.  Priests of Dragocroc draw their spellcasting ability from the stolen blood.  They must drink fresh Dragocroc blood once between full moons (at the full moon) or permanently lose all spellcasting ability and go insane (1 in 6 chance of also becoming a were-dragocroc, transforming into a humanoid dragocroc under the light of the full moon, filled with a burning desire to destroy the Priests of Dragocroc).  Any Priest of Dragocroc who suffers this fate will be killed on sight by the priesthood.   Only fresh blood spilling directly out of a Dragocroc statue mouth works, so every full moon every Priest of Dragocroc returns to the temple to drink from the waterfalls.  The potent demon blood provides two extra benefits to the priesthood while powering magic; all damaging spells do an extra 1d8 damage and all undead under the control of a Priest of Dragocroc have +1d8 HP, +1 to initiative and +1 to hit and damage.

Here are two stages of me messing around with this in Photoshop - I don't like the effect and will finish the piece with pen, markers and colored pencil. 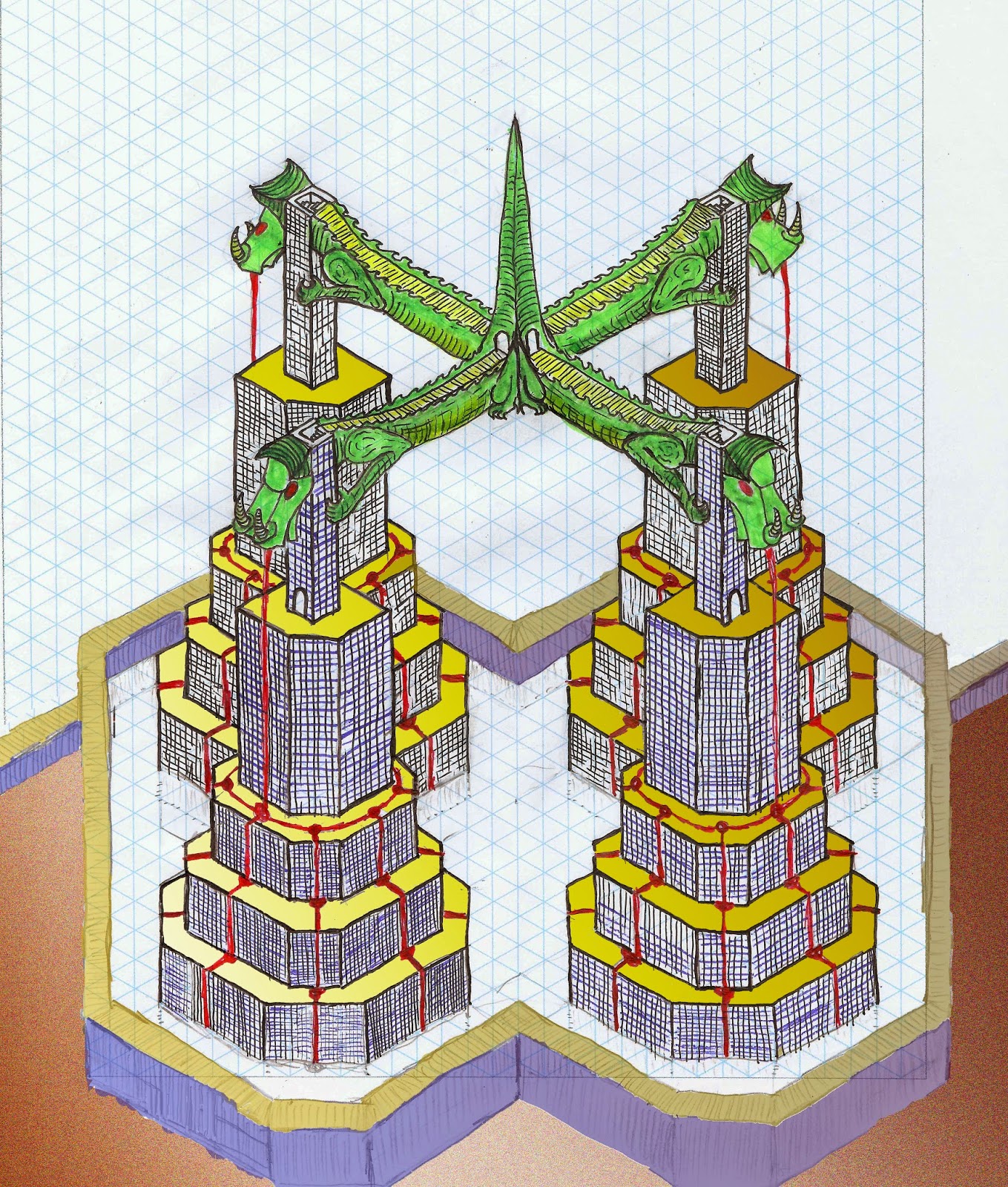 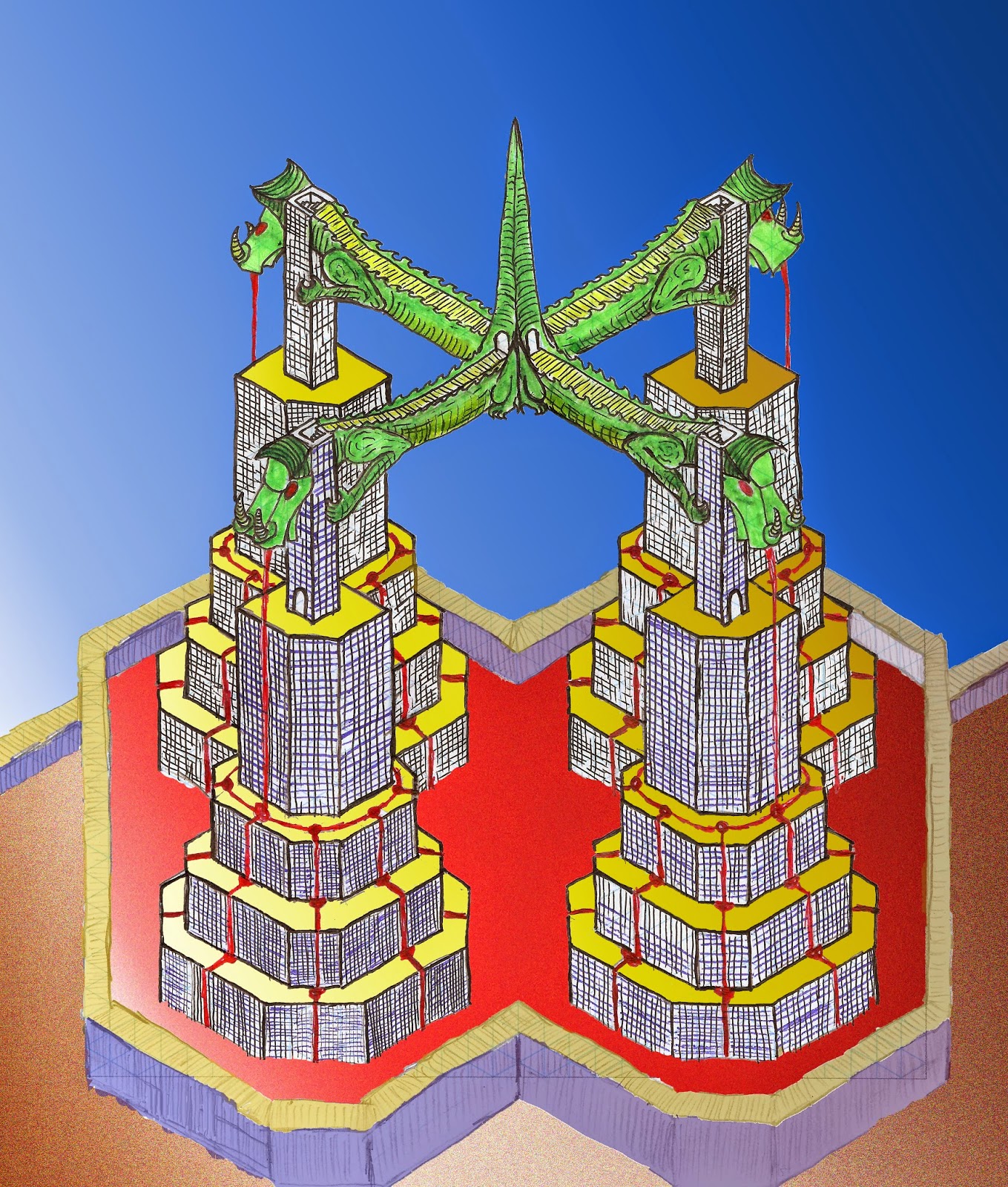 Posted by Unknown at 1:42 PM No comments: