This is a relic from the fall of 1998, my first semester at college (Tulane University).  I was not actively gaming at the time but I still created game material as if I was.  I recently found a notepad from back then that had a two page write up of the Opal House, and I think it is a pretty cool little locale.  I have transcribed the text below, but I have also included the original two pages at the end of this post for shits and giggles.  I left the text unedited with the exception of fixing a "they're - their" goof.

Built on the muddy banks of the Chala River, dozens of ramshackle huts are home to Chala's poorer residents.  Severe storms sometimes push the muddy river water up into this tangle of humanity, but there are always desperate people more than willing to throw up new shacks and call Chala home.  The Opal House is the most infamous of the areas many bars / brothels / smokehouses.  Built on the only permanent island among the myriad shifting sandbars of the Chala River, it is a three story structure built on a massive rock that juts out of the water. There are ferries that run on a cable between the isle and the mainland - the cost is 1 GP to go over to the island, but that fee includes free drinks and a bunk in one of the small bunkhouses if so desired.

[2012 Annotation: I am pretty sure the "small bunkhouses" I refer to are the 5 large one story buildings with a single door.  There must have been a disconnect between the map drawing and the writing.  One can only imagine the conditions inside those flop houses.] 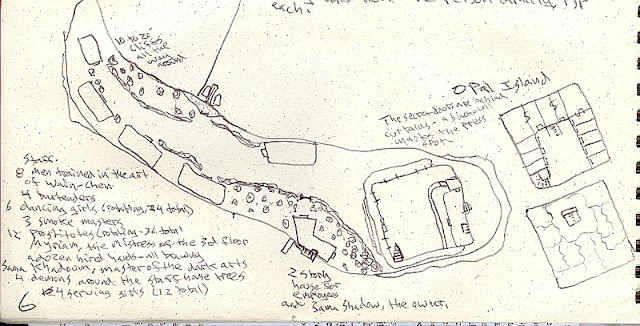 The first floor of the Opal House is a bar with seating and tables.  The air is smokey and music drifts in circles around the naked women dancing on platforms around the walls.  Up one flight of stairs is a cushioned room.  Silver hookahs snake their arms through a haze of sharta smoke to the mouths of the semi-conscious lying on the couches.  Access to this upper level - another two gold coins paid to the slim, dark men standing in front of the stairway.  Ten private rooms adjoin the main smoke room - tapestried and curtained off for privacy, more than a few deals and murders have occurred in their confines.  One more flight of stairs leads to the brothel - drugged out men and women stumble up the velvet covered stairs and emerge into a blue dream.  Rustling blue silk lines the floors, ceiling, and walls.  An unseen and unfelt force moves the silk in gentle swaying motions, and blue-green light flickers out of silver balls that float in mid air.  Passing out in this maze of hallucinations can be deadly - people have disappeared, and there is always a demand for drugged human bodies.Three gold at the door, and you can have a night of delirium on the third floor of the Opal House.  Ferries back to the mainland leave every half hour - 12 person capacity, 1 SP each. 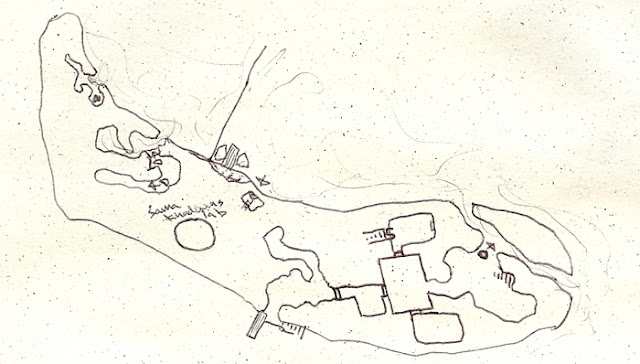 Opal Island is riddled with caves formed when limestone intrusions in the granite rock dissolved in the river water.  Several of these caves have been linked together by Sama Shadow and serve as store rooms and secret meeting halls for the mysterious man.  These caves and store rooms are usually empty - occasionally, hired hands will be loading or unloading boxes of wine, black lotus, sharta and lak.  These boxes are marked with Sama Shadows emblem, a black orb in front of crossed silver scimitars.  The northern store room has a wooden shield bearing Sama's standard - the orb and scimitars over a field of gold.  It hangs on the east wall, and pressing on the orb opens the sliding panel.  The lower levels are very damp and seldom used for anything other than holding drugged bodies. 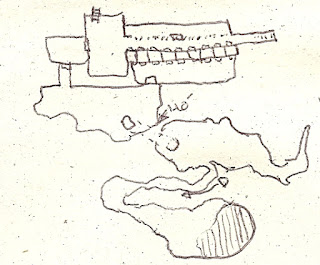 The lowest levels are home to Sama Shadows "servants".  In the first cave a horrific snake demon coils and flexes in the dark devouring virgin sacrifices and waiting for Sama Shadow to summon its services.  The lower cave swarms with larva, twisted yellow worms with human faces.  Sam Shadow uses these monstrosities as currency in many of his dealings.

Sam Shadow keeps beautiful women in the upper cells - their noses are plugged and a pipe inserted into their mouths.  With every breath in and out they inhale a blend of sharta and black lotus.  After weeks of this, they are beautiful  compliant puppets.  In the large cage, men and women who ended up in Shadow's care huddle terrified in their own feces awaiting their fate - there is always a market for deaf and dumb slaves, their will broken by Sama Khadoum... Two skeletons guard the long hall, terrifyingly resilient and resistant to damage.  A ladder in the corner of the first room leads up to a small cave with a submerged tunnel leading into the river, close to the main dock. 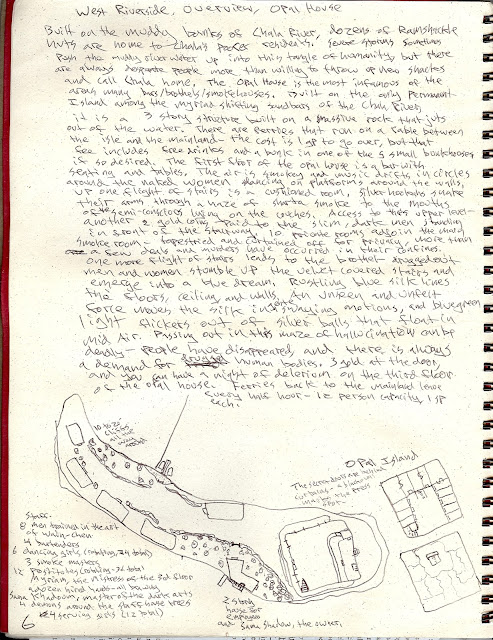 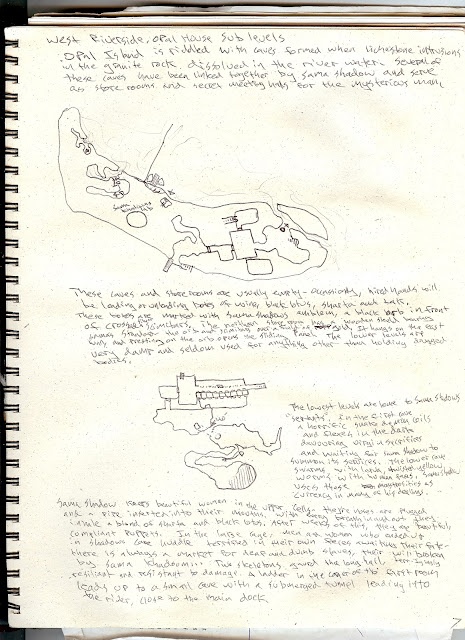