I really like this cutaway view of the pan-galactic gargleblaster, er, the pan-galactic "Starfriend" luxury liner.  Like many of the awesome illustrations in "Tour of the Universe", it is a two-page spread which sucks for scanning but it does make for an impressive experience leafing through the book (which is printed on a ridiculously heavy stock of paper).  The tickets and clearances needed to board the starliner are also presented, wonderfully anachronistic forms that appear to be filled out in the future by hand or typewriter.  If you were running any kind of game set in the future, there would be a lot of very useful handouts in this book.

Most of the keyed locations on the map are self-explanatory, but I am very curious about the "witchhold" located to the aft below the main thrusters.  I have not read the book word for word despite looking at every page for a while, so I could have missed something about the witchhold. 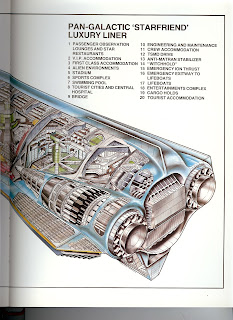 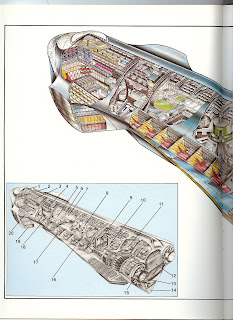 Our couple of inter-galactic tourists visit Orionis Delta III, or Behemoth's World, home to the universe's largest life forms.  Dig the scale on this pic - that is a spacecraft of some sort cruising by in the foreground, dwarfed by the behemoth it is flying past.  The behemoths strain "flying plankton" out of the atmosphere with their massive heads, which float along with the help of a series of helium sacks in the head and neck.  Another great picture shows the tour ship flying out the mouth of a behemoth skull and kneck preserved in upright position for tourism (steel trusses just barely visible in the skeletal remnants - I should probably scan that picture in too if I get a chance). 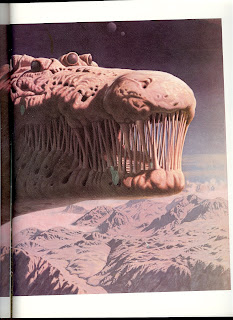 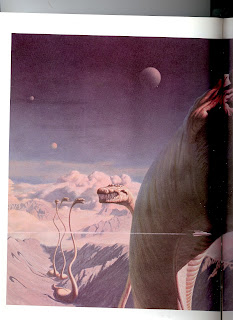 Email ThisBlogThis!Share to TwitterShare to FacebookShare to Pinterest
Labels: RPG, starship map, tour of the universe