I recently finished a fun piece of commissioned art, depicting an Experimental Ape from Michael Curtis' upcoming Stonehell 2.  I drew the Ogre Face Arch (the image on the Stonehell tee-shirts) and Coal the Black Bear in the original Stonehell Dungeon, and was very happy to oblige Michael with a new piece.  I never spend any time on artwork unless I have some specific project motivating me, but I always enjoy the hours spent when I do pick up pen and lay it to paper.  I ended up using kind of an unusual technique in this drawing, so I wanted to post about the process here.

I looked over the list of potential illustrations and "Albino Apes with Cybernetic Type Implants" caught my eye.  I introduced bionic chimps and orangutans into my Mutant Future campaign (War Chimps and Warangutans) and they were a big hit with my players.  I have had soft spot for great apes with cybernetic implants ever since. Once I claimed that picture as mine, Michael sent me the following details:

"Experimental apes are double-sized albino gorillas that have two additional arcanitech arms grafted to their bodies below their natural upper limbs. These magical/mechanical arms possess great strength (equal to that of an ogre). These arms also deliver a powerful electrical shock. Any target struck by either of the arcanitech limbs must make a save vs. spells or suffer an additional 1d8 points of damage. Experimental apes are conditioned to be fiercely loyal to the Plated Mage and the Mage-Engineers, and seldom flee from combat. Attempts to charm them rarely succeed and experimental apes gain a +4 bonus to all saving throws against mental domination."

This presented an interesting challenge to me, as the easiest way to depict something as albino is to show it in bright light as mostly white, but I wanted to do a more shadowy drawing since the apes would be encountered underground in a dungeon environment.  I first did a few gorilla studies to get in the mood and shake off any rust from my art muscles. 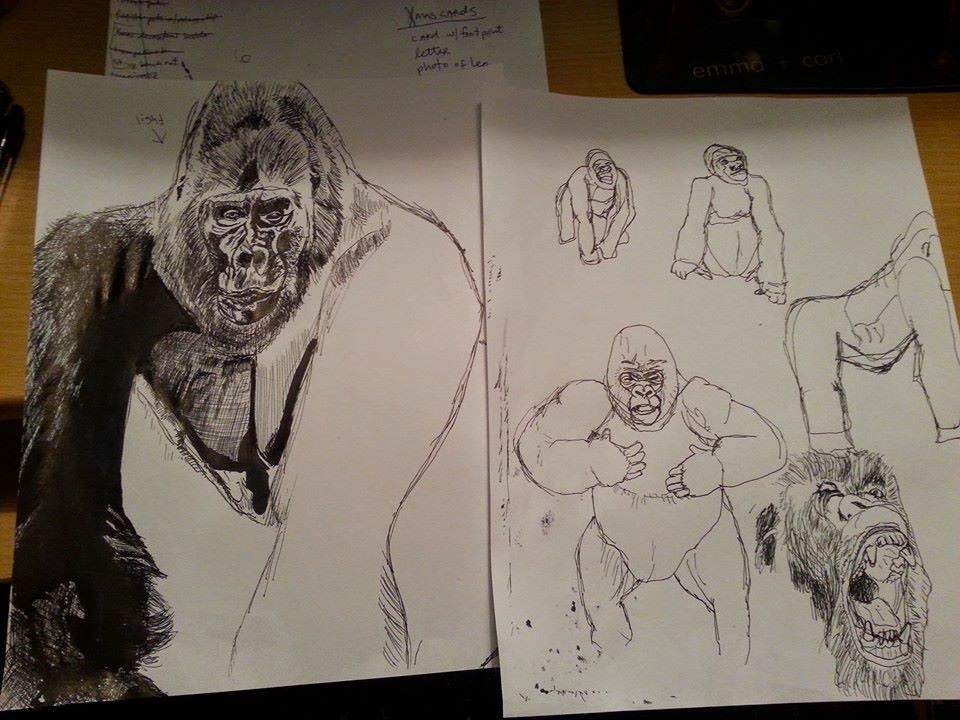 I wanted to use pen and ink but kept struggling with the fact that I really would need a nice white ink pen and dark paper to draw the image I saw in my head.  Then I hit on the idea of drawing the image with black ink on white paper and reversing it in PhotoShop.  I reversed the larger sketch I had done so far as a quick proof of concept.  Of course the image looks like a negative because the shadowing is in reverse (particularly obvious in the face), but I mostly wanted to see how the fur/hair looked and I liked the effect: 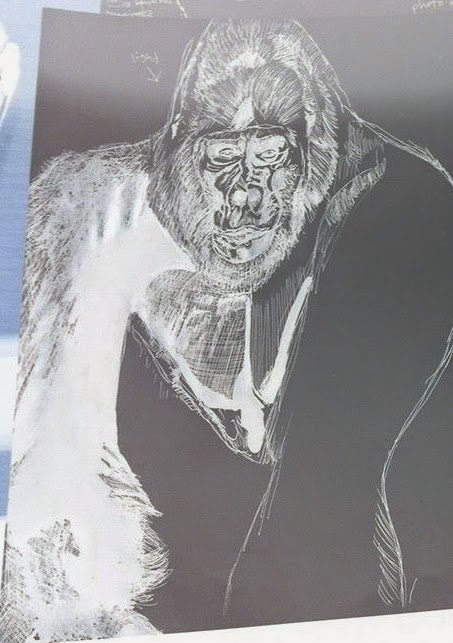 To avoid the appearance of a negative image once I reversed my final piece, I wanted to create a negative image to use as a reference point for my original drawing.  In other words, I would draw a negative image in the first place, so when it was reversed the shading would be correct but all the pen work would be white and the background would be black.  I spent some time collecting various pictures of gorillas, standing gorillas, crouching gorillas, leaping gorillas.  The whole time I was looking for a good reference picture that I could easily insert bionic arms onto, which made the choice a bit more difficult.  I finally settled on an action shot to use as a reference image for the drawing that looks like the gorilla just took a swat at something: One slight stumbling block was that the left arm of this gorilla was cut off; I could have just winged it, but at this point I had such a large collection of gorilla images that I picked a different image of a different gorilla with its left arm out in a similar fashion and literally just Photoshopped the other gorillas arm over the arm in this picture.  Here is the 2nd gorilla image I used for its left arm: 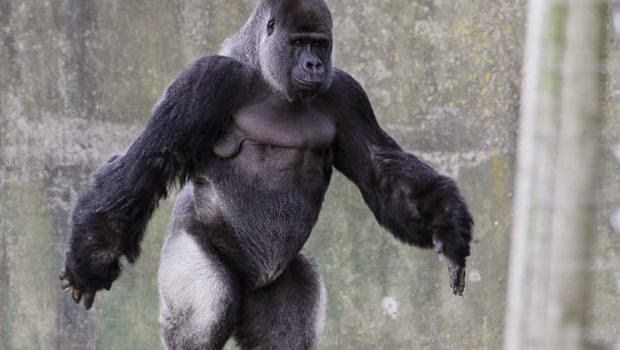 Next I added a second set of arms by copying the first set of arms, rotating them and moving them down below the armpit.  Then I turned the image into a negative to use as a reference while drawing.  Here is the resulting negative image of a four armed gorilla: 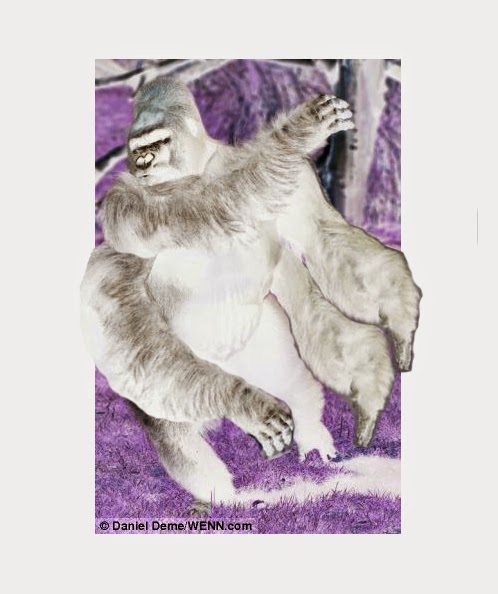 I printed this out, and drawing directly onto the print out, I transformed the lower set of arms into robot arms and added some bionic parts to the torso.  This printout is what I used as a reference while drawing the final image: 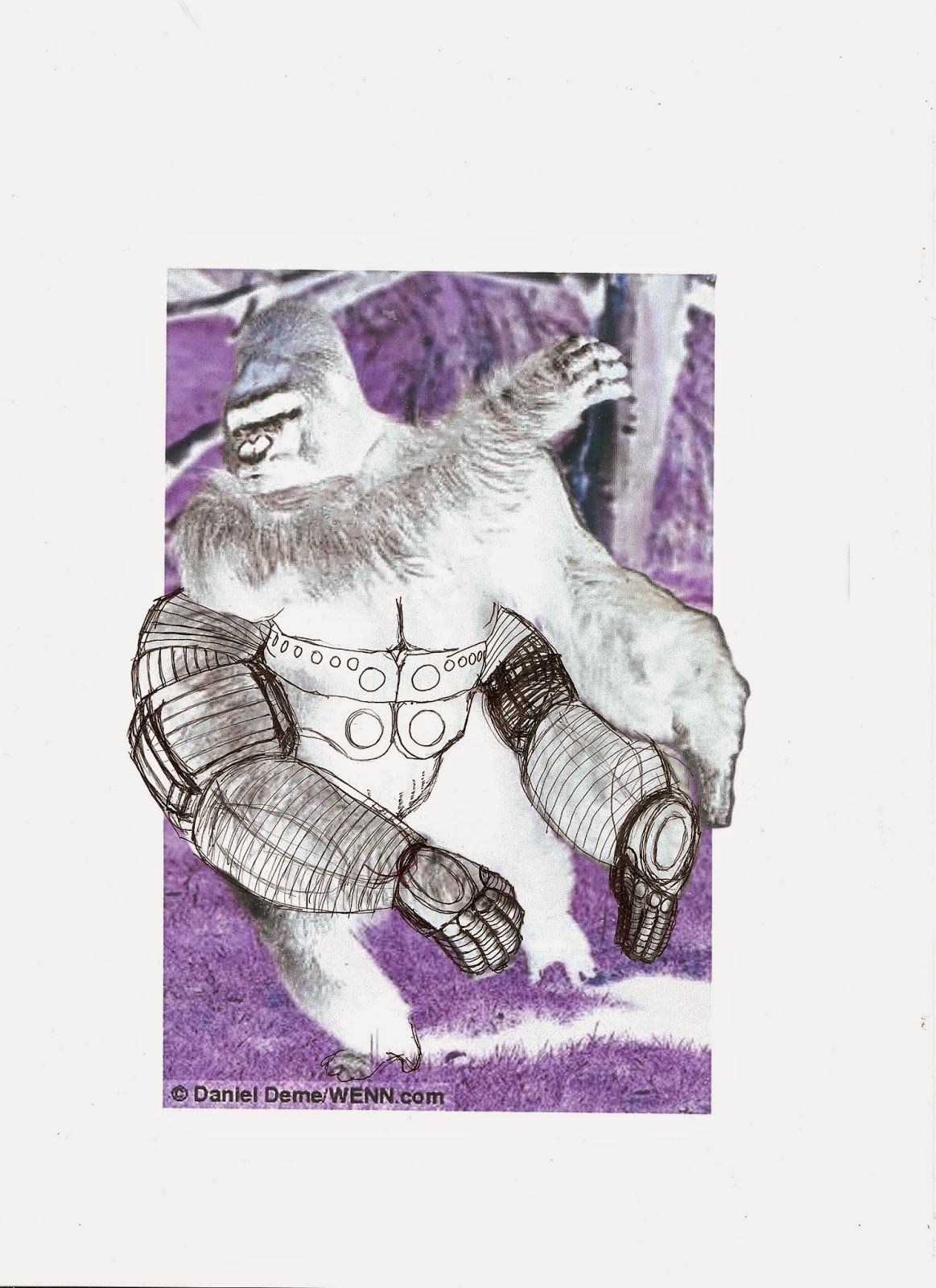 My purpose in using a negative reference image while drawing with black ink on white paper was that I would be able to scan and create a negative image of my final drawing; this way the inked fur of the gorilla would be white instead of black.  I hoped this would create the albino effect I was looking for while still allowing me to draw a mostly shadowy, low lit image.  So in other words, I went to some great lengths because I didn't have a good white ink pen and black paper!  My plan was to only reverse the image of the ape itself and leave the robotic arms the way I drew them, since I didn't have a negative reference image for them and also because I thought it would be an easy way to make the metal arms stick out as different from the rest of the ape.  After some work on the drawing I scanned it in to reverse it and see how the process was working - I immediately realized the image I had chosen as a reference image was too shadowed to create an obviously albino ape even if the fur cross-hatching itself was white.  The shadowed areas of the ape were just too dark and made it seem like a normal ape with a bright light shining on some of its fur: 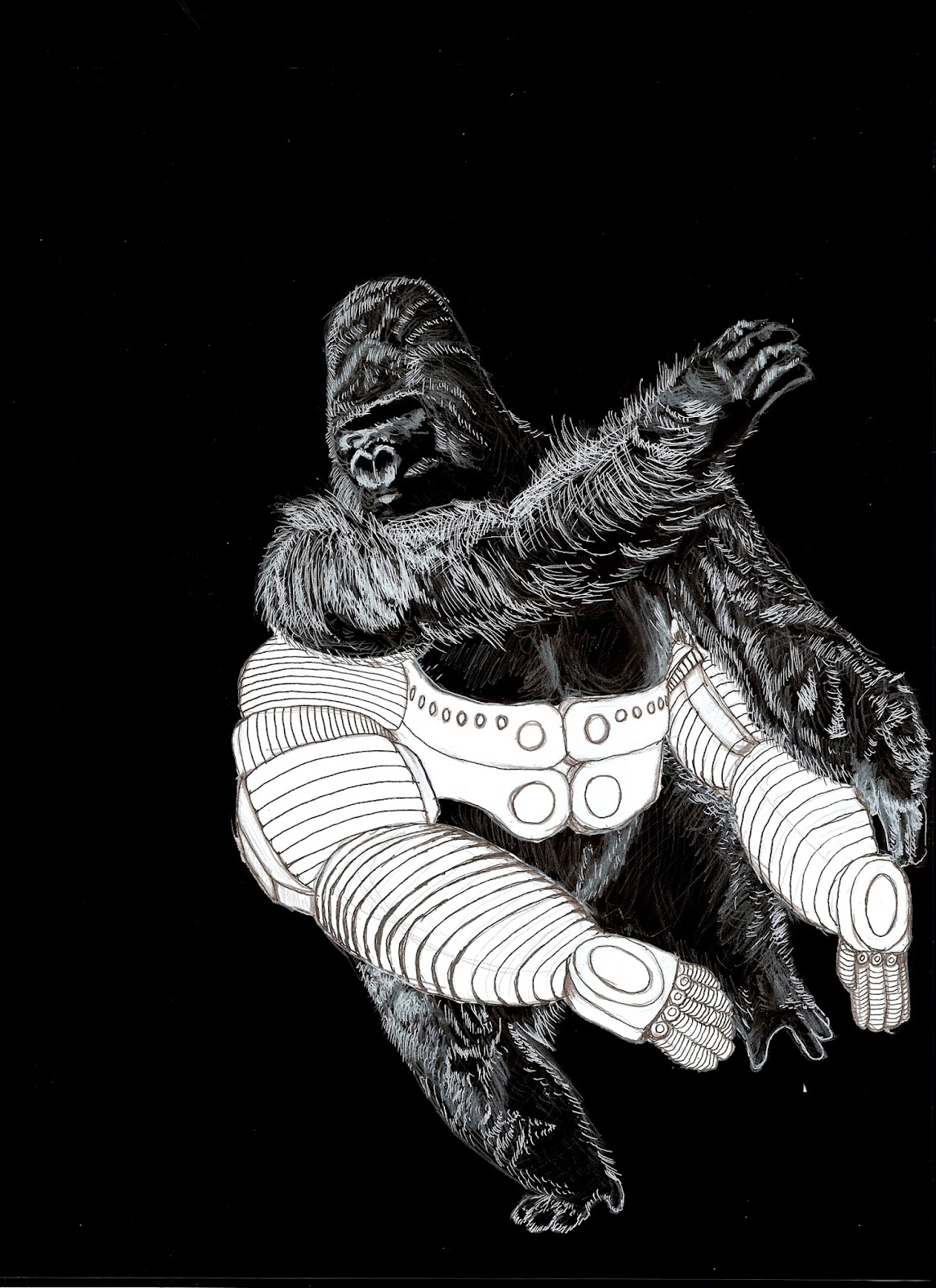 I ended up adding a lot more fur detail than was visible in the original reference image in the chest, stomach and rear leg. I went back in with a pencil in addition to the pen, to lighten up the ape in relation to the background.  Even the most shadowy areas got at least some light pencil fur added.  Several times I called it done, scanned it in and reversed it and decided I still needed to add even more pen and pencil work.  Finally, I decided I had done all I could do and was running the risk of muddying up things if I kept adding more fur.  I added some more pencil shading to the robot arms and scanned it one more time to reverse it and do some more touch up work in Photoshop.  For reference, here is the original (un-reversed) scan of the final drawing and then the reversed image at that point.  I found it very interesting how the entire time I was drawing from the negative image the head just didn't look right, but the second I reversed it, it looked awesome!  My mind had a hard time looking at the original (unreversed) drawing and processing where the eyes were I think.  I just had to trust that I was following an actual negative photo of a gorilla face and as long as I faithfully shadowed where I saw shadow everything would work out okay once I reversed the image.
I carefully went in and selected just the bionic arms to put them in a separate layer of the Photoshop document and leave them un-reversed.  this also allowed me to use a Photoshop effect (Outer Glow) to make it look like the arms were glowing - I was hoping this would evoke the electric shock they could deliver.  I also fixed up the feet and left hand a bit in photoshop since I was unhappy with the way they looked when scanned in (I had made the mistake of drawing an outline around the feet in pen which ended up being a glowing white edge around the toes, and the shading I had done on the left hand I was never happy with).  Finally, I had to figure out what to do about a background.  I didn't really have the time to draw a background (my wife and I recently had our first child, and between working ~55 hours a week and spending as much time with baby Leo as I can, I really don't have any "free" time these days) so I played around with some different things in Photoshop.  I added a gradient to suggest a surface at the bottom, and played around with different ways to crop the image.  I settled on a black circle around the ape, with a slight gradient to gray toward the bottom right, and the ape itself protruding past the background in places to suggest that it was coming out of the page at the viewer.  I know this is kind of cheesy but as soon as I tried it out I really liked the effect it had in this case.  Ultimately I probably didn't save any time versus drawing in a background by hand onto the original drawing and rescanning, because to add the photoshop background I had to carefully carve the entire image out of the black background so it could be on a separate layer from the circle gradient (otherwise I couldn't add the gradient and have the ape look like it was standing on top of it).  This took quite a while as I didn't want it to be a sloppy select job.  I had to go in pixel by pixel in some cases to remove everything except the ink strokes I wanted to keep around the edges.

I have to say though that I am very pleased with the end result - and I can't wait for Stonehell 2 to come out!  Maybe some of you will get to sick one of these bad boys on your players (or meet an untimely demise at their robotic hands if you play on the other side of the DM's screen!).  Final image: