As promised, some maps

We just had the  2nd session of my new Waterdeep campaign yesterday.  I promised the group I would post some maps for them to reference.

During our first session the group had scraped together and paid a rush fee (50gp) to the Surveyors, Map & Chart-Makers' Guild for a copy of a map of the city sewers.  Although rush jobs typically take two days, the guild had extra copies of the sewer map as they are under contract with the Cellarers and Plumbers' Guild to maintain and supply up-to-date maps of the sewers.

The group also asked the Steward (and current employer of the PCs) of House Adalbrant (known for patronage of map & chart-makers in pursuit of their expansionist trade dreams) if there happened to be any maps of the city sewers in the house library.  There was indeed an older map, drawn before the construction of many of the sewer mains which now connect the sewers of the different wards.  This older map shows 3 sinkholes that drained out the sewers (down into subterranean levels unknown) of the North Ward, Trades Ward and parts of Castle and Dock Ward.  There are some other differences between the two maps, and anywhere a passage shown on the old map bisects one of the new sewer lines, there is a bricked over passage.  The party already knew that there were many old tunnels that were walled off in the sewer (thanks to the late great Marco, contact of party murder-hobo Lochelech.  Poor Marco met an extremely bitter fate in last night's session, but that is a story for another post).

Current Sewer Map (from Waterdeep and the North by Ed Greenwood) 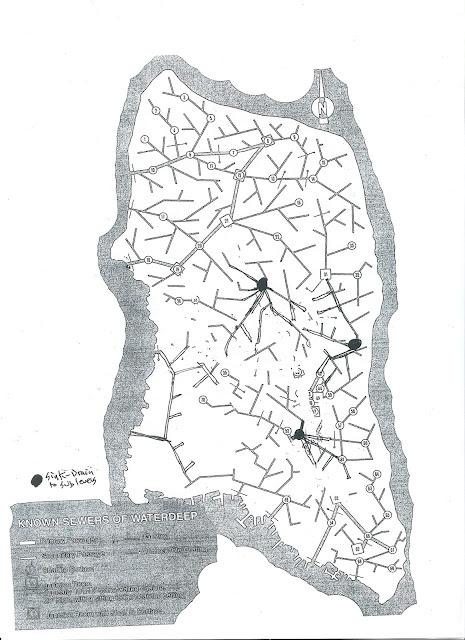