The Internet is a Megadungeon

And there is some fucked up shit waiting to devour your soul, tucked away in a rarely visited sub-level.

I have been spending a lot of time lately geeking out on my own website - modesty never my strong suit, I bought the carlnash.com domain name a while ago and I just recently purchased hosting and started making my site.  Time spent making my site easily navigable, integrated with Facebook, findable by Google, etc., got me thinking about dungeon design in a whole new light. 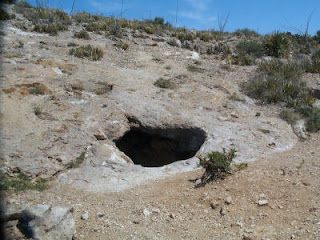 My website is a small little collection of hand-carved tunnels; but it is part of a megadungeon.  There is a cave mouth in a little hill outside of town; that cave leads to http://carlnash.com/index.php - the home page - the "front door" of my little corner of the dungeon.  This cave is mostly empty, well visited, with five tunnels leading away to other chambers of my site, each tunnel mouth helpfully marked with the name of the destination chamber.

[Internet Megadungeon Feature 1: All exits are clearly marked with a descriptive name for the destination]

There are other exits as well, obvious exits, but these dive straight underground and travel a great distance before re-emerging in other regions of the vast megadungeon; telepathicdumpster.com; the kingdom of myspace; one lengthy and serpentine passage even emerges right here in this blog!

But wait!  Might there be more to the well traveled entrance chamber than first meets the eye?  Graffiti scrawled on the cave wall seems to have been left by the original cave builders, goblins of Clan Carlnash.  One scribbled note seems to be referring to a secret exit from this chamber!  The secret door is not hard to find; if the cavern wall is prodded, one section will be found to swivel on a central pivot, revealing a black portal beyond...  the portal leads to another dimension, the dark side, http://carlnash.com/darkside.php.  Anyone running their mouse over the carlnash.com home page will find the "secret link" as their cursor turns from an arrow to a selector icon when it passes over the hidden exit.  Using visual clues as to likely locations for the secret exit may speed up the search.  Those bold enough to step through the portal may not so easily find their way back; the only exits from the dark side go further into the dungeon besides one marked "Destination as yet unknown".  This unnamed portal does return to the home cave.  The dark side itself is unremarkable; it has a blacker feel and a strange image for a banner, but not much else... unless "Detect Magic" or a similar ability is used... then it is revealed that hidden messages and locked portals were woven into the very substance of the dark side during its creation (hidden messages and "shadow links" in the source code of the page).

Leaving the home cave down one of the five exits leading further into the carlnash caverns, explorers would soon find a peculiar feature of the megadungeon; most chambers within a level of the dungeon will be totally interconnected, allowing for easy travel from any point to another in only one step.

The carlnash caverns are also connected to a parallel world, with gates to the world in every chamber... but the gates are one way FROM the world to the caverns!  The gates are plainly visible in each cavern, marked with the ancient symbols of Facebook, and invite any who know the secrets of that alternate reality to use their secret password to unlock the gate and open a two-way portal directly to the speaker's Facebook homeland.  Using a gate in this manner does leave a visible power signature that makes it possible to tell how many visitors have activated it.

[Internet Megadungeon Feature 3: many exits and other features will be password protected; prior membership in a particular organization or subterfuge may be required to gain access to passwords.  Carrying a badge of membership in an alternate reality like the Kingdom of Facebook will often unlock different content in many rooms throughout the megadungeon.  Many other actions and even the paths taken by Internet Megadungeon explorers may also impact what content will be found as the megadungeon is explored...]

[Internet Megadungeon Feature 4:, over time the dungeon will make itself appear as the explorer WANTS the dungeon to appear (cookies; the targeted ads/treasure maps and personalized content/room decorations feature...)]

Long term observers of the carlnash caverns would notice that the front cave is not the most heavily trafficked area; more than twice as many explorers come through the portals from the land of Facebook directly into various areas of the caverns than enter the caverns through the cave mouth in the hill.  The busiest cave is the vast cavern that houses the Nash Emporium.  The few vendors peddling their wares in the dark bely the bustling underground marketplace the chamber could hold.

A greedy adventuring party would soon grow tired of the caverns of carlnash; there is not much loot to be had at this point (just a few free song downloads and free art) and like almost all explorers of the Internet Megadungeon, the party likely possesses a magical warp whistle that lets them teleport to almost any other section of the megadungeon at will.

[Internet Megadungeon Feature 5: the URL bar is the magic warp whistle, and all explorers can just teleport to a known destination or use the scrying balls that are cheaply had at any general store (search engines like Google) to find a destination]

So why does our brave adventuring party not just teleport to the biggest chambers full of loot, slay the dragon, and party like it is 1999?  Sometimes all is not as it seems in the Internet Megadungeon.  Many clearly labelled exits actually lead to somewhere completely different; many well known and previously safe chambers may suddenly become home to cunning assassins who strike from ambush, or worse yet, use tasteless, odorless gas to cripple explorers from hiding.  Countless factions live out their lives in the Megadungeon, and many vie for the attention of the party.  Come raid our caves, they hiss from the shadows, our dragon is uncensored, and our jewels are available for free download...  lies, all lies!  The dragon has a giant black bar obscuring its chest, rendering your slaying arrows impotent as they find no target.  The jewels, so carelessly scattered, vanish into vapors in your clutches as chuckling devils run out clutching contracts.  The free download is of a trial gem!  It is a worthless piece of crap crudely shaped to look like a gem!

[Internet Megadungeon Feature 6: subsequent inhabitants of the megadungeon take advantage of rules 1 - 5 manipulating and breaking them in an attempt to harm and rob explorers...]
Posted by Unknown at 2:12 AM