I introduced the Snake Men in my 4e campaign in Session Numero Uno through the wild tales of a swamp trapper who told of a "city made of gold" that he and his friends had discovered, which he claimed was inhabited by snake men. 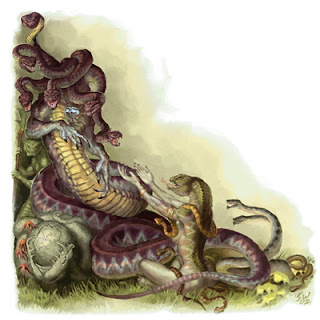 A handful of sessions later the party was in an alien spacecraft made of pure energy and they were accessing the data logs of several linked satellites in stable planetary orbit.  In the course of observing several billion years of planetary formation they also caught a relative blink-of-the-eye in time highlighted by a meteorite slamming into the exact center of the formation of alien spacecraft, forming the depression now filled by the swamp.  Yes, the many minareted and domed city which stood on the meteorite was made of gold. A circular rocky ridge in the center of the swamp, thrown up by the impact, conceals the city of gold. Mushroom life sprouted across the meteorite shortly after the crash, and from the mushrooms sprang tadpoles which metamorphosized into snake men.  To the party's horror they discovered that all of the humanoid races of the planet had their origin as experiments released by the snake men scientists into the swamp.

When the party thought to look for the visual evidence of the swamp trampers finding the city, they observed two snake men meet the three trappers on the top of this ring.  A snake man held up its hand and two of the trappers disintegrated into dust.  The third trapper soiled himself as the other snake man grasped him solidly for a moment before releasing him.  The party's informant fled promptly.

Curious, the party kept investigating that moment in time through satellite footage and discovered that the outbreak of the white death plague could be reliably dated to shortly after the return of this swamp trapper to the settlement.

Several sessions later, the party had crossed the mountains and was exploring the verdant rainforest beyond.  They found an artifact of the snake man, a flying laser shield meant to be worn by a snake man warrior.  This shield revealed that the snake men had four small organs that could interact with four circular depressions on the inside of the shield, like four sensitive finger-tentacles that stick out of the snake man torso.

Using ritual magic to look into the shield's past, they watched its creation by snake man scientists, all of whom had four arms.  The scientists tended to mats of mycelial tissue which they grew in molds in the shape of the shield and many other items (I just realized that the use of the word "mold" in the sense of a 3-dimensional negative shape that you pour or push a substance into to form a sculpture could be confusing when the substance that fills the mold is mycelium!).  When the molds were full of mature mycelium the snake  man scientists activated a complex arrangement of pearls and gemstones that transferred energy through shadow and turned the mycelium into many different substances, gold in the case of the enchanted flying shield.  The discovery of this shield was the first step in the party's current understanding of how to manipulate energy through shadow, the foundation of a true understanding of magic.

When the party began to piece together the history of the city states of the great human civilization on the other side of the mountains they realized that the influence of the snake men had crossed that great natural barrier long ago.  They discovered the fingerprints of the snake men in the blood tattoo magic that raised their hackles.

Even Manu Jablitu, the ancient technomancer lich who has become number one on the party's most wanted list for quite a few sessions in a row now, was first encountered because his services were procured by the snake men to solve a dimensional instability.  A while back the players in my Mutant Future campaign discovered an alien installation in a strange dimension that had a machine in it containing the entire 4e probaverse in a controlled singularity.  A player running PCs in both campaigns looked at the machine and infamously said "I'll flip some switches".  I asked him to roll d100 and he rolled a critical failure "01".  As a result, the machine began powering down and the stars started going out in my 4e campaign and many monumental constructions of the ancients that drew their power from the stars no longer worked.  The snake men were pissed and Manu Jablitu was brought in to fix things, but interestingly the 4e party managed to stabilize the probaverse without resorting to reprogramming the machine like Manu Jablitu intended to do.  All Manu Jablitu has done since is rise to near mythological status as the party keeps encountering more evidence of the crap he has done in the past.  Much of which was done under the patronage of the snake men, evidently.

I bring all this up because last session Beautiful Bob used the psychic enhancing module in the radiant energy vortex that he was accessing from the energy bath of the lich Pay-Gon to split his consciousness into 16,000 pieces to simultaneously accept a telepathic information feed from the 16,000 intellect-equivalent crystal gas mind the party encountered.  It may take him a while to process, but Beautiful Bob actually received the entire genome of both the warrior or "snake man prime" caste and the four-armed scientist caste in this telepathic transmission from the crystal gas mind.

I plan to write several posts about the biology of the snake man now that the party would definitely know the ins and outs.