The Giant Horned Lizard, despite its impressive appearance, is mostly insectivorous and uses its long sticky tongue to pull the large beetles and flies that swarm around the hot sulfur pools in the lowlands into its small mouth.  It is roughly the same body mass as an American Bison (buffalo) but stands taller on its long legs.

If threatened, it will aggressively respond by charging and head butting its opponent with its vicious spikes, then bludgeon with its spiked tail and attempt to finish off the unfortunate victim with a trample attack.

The Giant Horned Lizard is the favored mount of the Grey Orcs.  Only the elite soldiers of the Grey Orc hordes receive the necessary training to control the spiky mount, but those that have mastered the art can ride across the lowlands without fearing the everpresent Ochoka bushes (which bounce harmlessly off the spiky hide of the lizards). 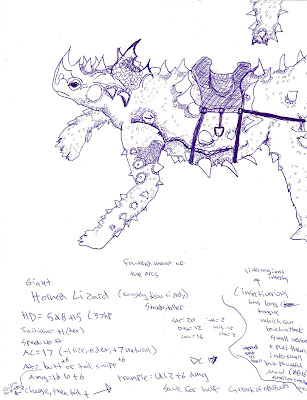 It has a powerful bite but its small mouth only allows it to use this form of attack on creatures that are small (Hobbit sized, say, or smaller) - Bite: 2d8+6, and tongue has a 15' reach and can pull victims in for an automatic bite if the tongue hits (tongue attacks at +8, or an additional +2 to hit on top of the 7 HD monster chart)
Posted by Unknown at 1:19 AM