Kid in a Candy Shop

I have been feeling pretty cool lately.  It is so much fun having a hobby like playing D&D when you are an adult and can actually just buy the things you lust after instead of having to beg and wheedle your way into getting them from your parents.  On top of that, I have been lucky enough to get some cool toys lately before they were available to the general public.

First the Swords and Wizardry White Box set (which is AWESOME and I do not use that word lightly) arrived last week; I was lucky enough to be one of the select few who got in on the first pre-order (which sold out almost instantly).  Then came the 4e goodness.  I got a review copy of the Player's Handbook 3, which won't be released for almost another two weeks!  And it is full of good stuff, let me tell you, if you like 4e (look for my review of it to be published shortly at the Eye of the Vortex).  Finally, I got a set of the newest dungeon tiles from Wizards of the Coast, the Harrowing Halls set (also not released to the general public until March 16th).  Interestingly, the packaging proclaims that "All Dungeon Tiles products are compatible with all editions of the Dungeons & Dragons Roleplaying Game."

While of course this is true, I still thought it was kind of neat that Wizards was even still giving a nod to earlier editions at all.  Check out the tiles taking over my computer and keyboard: 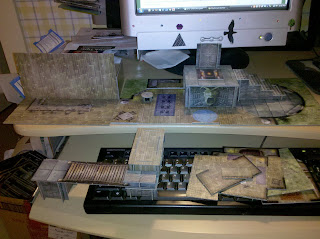 Close up of the face in the wall: 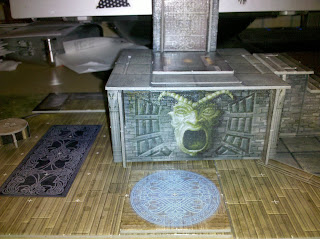 One thing that I really like about this tile set is that all the tiles are double-sided - the 3D elements are stone on one side and wood on the other, often with different accents (a red curtain on the inverse of the head on the wall, for instance).  This allows you to make either a house or a dungeon with the same set of tiles.  Another bonus - the set includes a bathroom, complete with a shitter (excuse me, an oubliette), a washbasin and a barrel of water. Nevermore shall there be no place to crap in my dungeons!  Actually, to tell the truth I have always included facilities in my dungeon plans, even if they consist of a pile of steaming dung in the corner of the room.
Well, on that cheerful and appetizing note, I bid you adieu!  I am off to play with my new toys.
Posted by Unknown at 11:05 PM