My players (unbeknownst to them) started exploring the 1e module "The Hidden Shrine of Tamoachan" last night in my 4e game.  I have, of course, made a few tweaks to what was originally a tournament module for AD&D.  The biggest change is that they are going through the module backwards.  If you are unfamiliar with the adventure, it starts with the players falling through a hole into a deep level of a hidden shrine underneath a pyramid temple, and they have to find their way up and out before they are killed by the poisonous gas that is filling up the complex.  Therefore, the players work their way up from the lowest levels and finally (if they avoid MANY devious traps) emerge at the top of the pyramid. 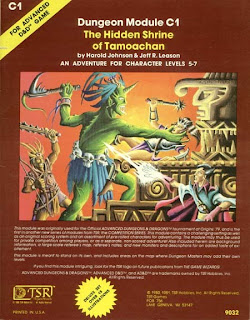 One REALLY hard fight later (I made the mummy-taur a reskinned Mummy Guardian, bumped it up to a level 9 brute for the base stats, then gave it some extras - an at will that was the ability to make two slam attacks in a round instead of one, to simulate both the human and spider halves being able to attack at once, and a special move action that recharged on a 5 or 6 that enabled it to shift 3 squares through enemy squares to simulate its ability to spider climb right over everything), Vomar was one HP a way from his negative bloodied value and absolute death and both he and Tilia had mummy rot.  The session ended there as the party retreated to try and find help to cure the disease (they had taken an extended rest first, and the disease had gotten progressively worse for Vomar so that he was one bad roll on an extended rest away from dying from the disease, and in any case was at -10 HP permanently until the disease is cured... the party is 2d level... ouch...).
Thus ended session one of using a 1e module in 4e, and I have to say it worked great.  The rooms were plenty large enough for 4e combat, especially considering that the squares in 1e equaled ten feet so each translated into four 4e five foot squares.  I was most impressed with the party's logical trap solving ability, and I now know that I can throw an old school deathtrap style dungeon at them and have a good time!
Posted by Unknown at 11:24 PM